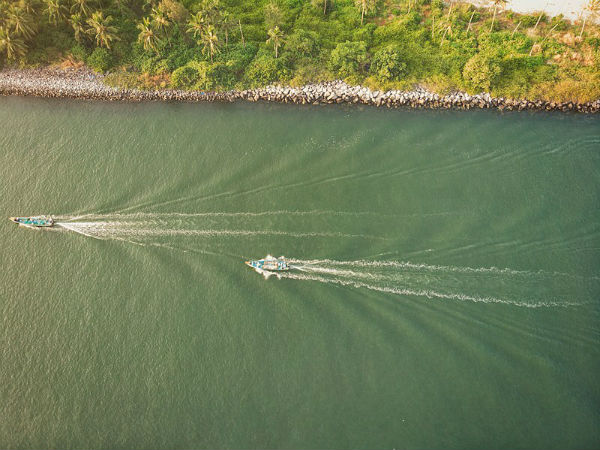 From old age customs, the deepest of forests, teeming wildlife, to art and natural goodness, Udupi is base to each of them. Also known as a temple capital, the tourist spots in Udupi surely make every traveller's desire come true; be it a nature admirer, a history fanatic or a devout tourist. With numerous mesmerising places in its vicinity; Udupi is truly a goldmine of the south.

What started from a quaint town, is now one of India's fastest-growing cities, with Manipal giving it sufficient modern-day presence with its colleges and urbane culture. Everyone can find something in Udupi to gratify their travel needs; be it the intricately elaborate architecture of the monumental buildings, or a sumptuous resort holiday by the beach.

Here is a complete travel guide for Goa tour.

By air: Bajpe International Airport, nestled in Mangalore is the nearest airport to Udupi. It is located about 54 km away from Udupi. Frequent flights fly from Bajpe Airport to other major cities in India.

By Train: Udupi Railway Station is located in the heart of the city, and the railroads are well-connected to other cities in South India. Bangalore, Chennai and Cochin, are the prime cities of South India, to name a few.

By road: Roadways are well-maintained. You can avail frequent buses to Udupi from other cities in Karnataka

Winter season is the best time to visit Udupi, i.e. from November to March. Summers are scorching, and monsoon brings in a lot of rain, so avoid summer and monsoon season. The weather remains pleasant during winters and offers favourable conditions for sightseeing.

Places To Visit In Udupi

One of the most obvious tourist places in Udupi, Malpe Beach is a natural haven, traditionally known for its hamlet of Mogaveera fishermen community here. Now a celebrated tourist hotspot, Malpe Beach is the premier Indian beach which offers free Wi-Fi all day long.

There are also several watersport activities at the beach, including Jet Ski and parasailing amongst others. The massive shoreline of this stunning beach is also home to four beautiful rocky islands, of which the most popular and commonly visited is the St. Mary's Island.

St. Mary's Island is the most well-known amongst the four rocky islets of Malpe Beach. Also recognised as Coconut Island, St. Mary's is known for its unique crystallised basalt rock dispositions, formed millions of years ago due to volcanic activities.

These rock formations give the island its very unique view, making it a refuge for nature and geology enthusiasts alike. This geological goldmine also hosts one of the 26 geological museums of India, and yet it is an unexplored part that holds excellent tourism potential.

The Museum of Anatomy and Pathology in Manipal is a renowned traveller destination. Observed as the biggest of its sort in Asia, this gallery highlights human and animal exemplars. There are around 3000 specimens of organs and various pieces of human and animal anatomy, including the skulls of a whale and an elephant and the long endoskeleton of a King Cobra.

This gallery is also home to preserved skeletons of different animals, making it one of the most recommended places to visit in Udupi.

Kallianpur is a settlement in the Tonse East village of Karnataka in Udupi district. This small hamlet is developed with all modern-day facilities like schools, hospitals, transport, colleges etc.

Settled on the Southern banks of the Suvarna River, Kallianpur is presumably the place that was named by Cosmas Indicopleustes, a Greek merchant. This settlement also has the remains of a fort from the Vijayanagara period and is also home to two churches and around six temples, devoted to different gods.

Manipal is a neighbourhood in the city of Udupi, chiefly known as campus town because of the presence of the Manipal Academy of Higher Education. Drawing thousands of students and faculties from over 60 nations, Manipal is one of the most urbane areas in the region.

Settled atop a plateau, Manipal proffers scenic vistas of the Arabian Sea on one side and the Western Ghats on the other. Some of the most famous and breathtaking places to visit in Udupi are found near Manipal include Manipal Lake and Kalasa Fort.

Formerly called Pandaya Nagri during the reign of Jain empire, Karkala is a significant stop for spiritual tourism due to its strategic position on the route to other pilgrimage sites. Settled at the bottom of the Western Ghats, Karkala is enveloped with greenery throughout the year.

Karkala is majorly a Jain centre and owns a 41.5 ft tall statue of Gomateshwara or Lord Bahubali. Every 12 years, an extensive ceremony is organised, called the Mahamastakabhisheka, where thousands of Jain adherents bathe the Bahubali statues in saffron, milk, sandalwood, honey, turmeric and vermilion.

Resting between Mangalore and Udupi town, Kapu, or Kaup Beach is one of the best spots to visit in Udupi. Due to its pristine water and sandy shoreline decked with palm trees, Kapu Beach is a crowd favourite. This beach also hosts an age-old lighthouse built-in 1901 and is open for visitors during daybreak from 6:00 am to 7:00 am.

You can kill hours taking in the panoramic view of the sun slowly soaring against the backdrop of the endless ocean, as it is utterly breathtaking. The waters of Kapu Beach is more turbulent than the gentle Malpe Beach but is remarkable nonetheless.

Sri Krishna Temple, also known as the Sri Krishna Matha, was built in the 13th century. It is a Vaishnavite temple endowed by Saint Jagadguru Sri Madhvacharya. This Shrine is known for a unique feature, that is, that the deity is revered through a silver-plated window with nine holes, known as the Navagraha Kindi.

The Ashta Mathas offer the daily duties to God, and to witness it, tens and thousands of people flock into this temple, from all over the country. Known all around the world for its customs, rituals and its teachings in Dvaita philosophy, Sri Krishna Temple also lures inquisitive foreigners willing to learn about this culture.

Comments
Read more about: udupi karnataka
Other articles published on Dec 4, 2019
We use cookies to ensure that we give you the best experience on our website. This includes cookies from third party social media websites and ad networks. Such third party cookies may track your use on Nativeplanet sites for better rendering. Our partners use cookies to ensure we show you advertising that is relevant to you. If you continue without changing your settings, we'll assume that you are happy to receive all cookies on Nativeplanet website. However, you can change your cookie settings at any time. Learn more
Change Settings Continue