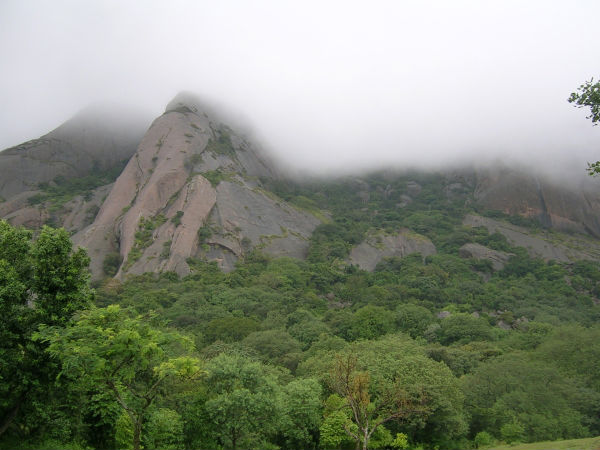 Nestled in the Deccan Plateau of Karnataka, Savandurga is an amalgamation of two hills (Karigudda and Billigudda) and is mainly formed of granite rocks and surrounded by deciduous forest. Far-famed to be the largest monolithic rock in Asia, Savnadurga Hill is a 4200 feet tall exciting combo of rocky, muddy and forest trails with caverns, located 60 km away from Bangalore city centre.

Also known as 'Savinadurga' in Kannada (Fort of Death), the trek was banned in the early '80s as it was known to be dangerous with unsafe defence structures. However, due to man-made safe hiking trails, Savandurga is more of an adventure trek than danger nowadays and is a paradise for novices and professional climbers. Also, during the monsoon, one can effortlessly get a glimpse of yellow throat bulbuls amid the lavish green perspectives and Magadi backwoods.

Continuously uphill trail with some rising and falling segments, along with the monsoon weather and the rocky terrain with many steep rock inclinations, make this 4 - 6 hour trek challenging yet fun climb for adventure aficionados. Scaling such inclined monolithic rock will definitely trigger an adrenaline rush! Besides the climb, Savandurga offers a stunning vista of the Manchinbele dam. And the Arkavathi river streaming into the Thippagondanahalli supply adds to the full, magnificent view.

Savandurga has two temples at its base. These temples dated back to 1340 AD and are believed to have been built by the Hoysala rulers. One is the Savandi Veerabhadraswamy temple and the other is the Sree Lakshmi Narasimhaswamy temple. The way to the top is divided into four sections. Most of the trekking route lies on the southern side of the monolith, ranging from 700-950 feet of technical climbs. The path towards the top commences behind the Narasimhaswamy temple. There will be an asphalt stroll of 200 to 300m which prompts the trail.

The course is generally simple to discover as devotees and trekkers seen going towards it. The underlying path chases a muddy trail in the direction of some undergrowth. This area is a light rising until you arrive at the base of the slope. The rocky segment or the bottom of the hill denotes the finish of the first ascent. It should take you around 10 to 15 minutes to arrive at the base of the slope.

The subsequent segment starts as you step onto the slope and begin strolling up towards the highest point. Prescribed to start this area promptly in the day as once the sun gets overhead, the stone warms up and it can turn out to be very testing to climb in the heat, particularly throughout the summer months. No sooner than you start climbing up the rock, you'll get the chance to see significantly more greenery and glances of the Manchinbele reservoir. This area is somewhat steep. It's a decent 400-500m rising and should take 20-25 mins. The path isn't straightforward to spot, so look out for markings on the rocks and stones to guarantee you are on the right track. When you arrive at the old fort structure, you've finished the second segment of the trek.

From here the course turns significantly steeper. It is, in any event, an hour-long approach to another fort wall. There are impressions like engravings in the rock, utilized to climb up the slope. These spaces in the stone presumably cut in from the period of Dalavayi Devaraja or even prior. In this area, you will likewise get the opportunity to see the accumulation of rainwater in the hollow formations of the hill. You will also come across a couple of tanks used to store rainwater by the inhabitants of the fort.

A couple of moments after you arrive at the second fort wall; you get a break from the rocky path. The course presently changes into a rocky cavern structure and afterwards into a sloppy track directly until you arrive at the top. This part is somewhat dubious as the path is unbalanced, and on the off chance that you miss the markings, you may get off the trail. Additionally, there are parts where you'll need to jump and move over boulders.

Once you cross these boulders, you soon arrive at the top. Then you will have to walk toward the Nandi temple and soak in the extraordinary sight. It should take you around 10-15 minutes at max to arrive at the sanctuary. The excursion is amazingly remunerating as the view from the top is terrific. You can see the lavish green backwoods and parts of the Manchinbele and Thippagondanahalli supplies and in the skyline sight at towns of Ramanagara and Magadi.