Travel To Lesser-Known Destinations In Telangana 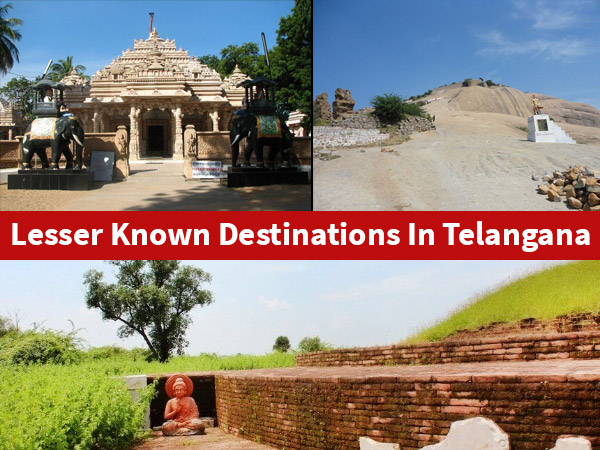 "There are still so many places on our planet that remain unexplored. I'd love to one day peel back the mystery and understand them." Annie Leibovitz

The newest and the 29th state of India is Telangana, which was formed in the year 2014. The state comprises of 10 districts of Andhra Pradesh. The glowing IT hub of Hyderabad will be the common capital to both the states until Amaravathi, the future capital of Andhra, develops fully.

Telangana might be new as a state, but it bears the distinctive imprint of the old as well as the new; it has a good share of gorgeous spots and cultural confluences.

Also Read : The Land Of CharMinar

Offering an excessive amount of opportunities for the travel fanatic, it boasts of its rich cultural legacy, for being the cradle of the powerful Deccan dynasties like the Kakatiyas and the Chalukyas.

While the vibrant culture and regal landmarks of Hyderabad remain the popular picks, the refreshing calmness of Telangana's lesser known destinations will definitely fascinate the offbeat traveller in you. Read on further to know more.

This 2000 year old Jain temple in the calm village of Kolanupaka is one of the major pilgrimage centres of the Shwetambara Jains of South India; it houses the idols of various Jain Tirthankaras.

Stare at the imposing sandstone architecture, the beautiful pillars carved out of white marble, the stained glass windows by the roof and the ancient jade sculpture of Mahavira at this temple.

Also visit the ancient Shiva temple of Renukacharya across the road.

Located on the scenic hillock and surrounded by a large quantity of ayurvedic herbs, the Ramagiri Khilla is an invincible creation which stands as a testimony to the glorious past of the Kakatiya Dynasty.

It also offers a breathtaking view of the confluence of the Godavari and Manair rivers and lush green surroundings. There are a host of mythological relics to explore; the hill is often called Aaramgiri which means the hill of leisure.

The crumbling walls and creeper-adorned sculptures of the ruins of the once glorious Gautameshwara temple at Manthani will give you the feel of you being a character straight out of an Indiana Jones movie.

Situtated on the banks of Godavari, the ancient sculptures and the ruins speak in detail of the bygone era. An intresting fact is that this place was once a centre of Vedic learning and was known as Mantrapuri of the village of hymns in the ancient times.

Nestled amidst the leafy forests of the Nagarjunasagar Srisailam Tiger Reserve, the Mallela Theertham is a peaceful scenic 150 ft waterfall, which makes it perfect for a weekend getaway along with friends and family.

As you walk down 300 odd well-laid steps to the forest-enclosed fall, you can soak yourself in the silence of the surroundings, and have a splash in the waterfall and listen to the occasional shriek of the spotted deer.

Travel across the undulating hills and forested valley to the supremely serene Pakhal Lake; the man-made reservoir was constructed by King Ganapathi Deva of the Kakatiya dynasty.

Along with the Pakhal Wildlife Sanctuary on its banks teeming with wildlife, the lake boasts of a scenic beauty which is extremely calming. Camping on the banks on a full moon night would give you an unforgettable experience.

The name comes from Dhulikota, which means the fort of mud; this huge Buddhist Mahastupa and Vihara dates back to 2nd century BC. As the grass surrounding it sways in the breeze, this primeval Buddhist site seems to reverberate with its rich history.

Look for the historically significant and eye catching relics, which are a standing testimony to the master craftsmanship of the era.

The gushing waters of the Kuntala waterfalls which is also the highest in Telangana offers a great respite on the hot and humid days. According to local legends the waterfall is said to have got its name from Shakuntala.

Jump under the misty spray of the waterfall before embarking on a leisurely picnic amidst the lush canopy of the Sahyadri foothills.

A majestic fort atop a monolithic hill which is more than 700 ft in height, the Bhongir or Bhuvanagiri fort is named such for the carvings at the hill temple which depict the entire universe. Trek to the imposing citadel, whlist enjoying the sunrise and the mesmerizing view of the surrounding lowlands.

Before heading down, try your hand with rock climbing and rappelling which is a must for those craving for an adrenaline rush.

A very unique dam which has no flood gate, the Pocharam Dam is a wonderful sight during monsoons, along with the overflowing Manjira river which transforms itself into a frothy wall of water.

Enjoy the pleasant breeze, fragrant with the smell of forest flowers at the old watch tower, as you wait to catch the glimpses of the lively wildlife. You can also take a boat ride to the island nearby and learn fishing from the locals at this picturesque spot.

During monsoon, as the water fills the surrounding area, this temple looks like an island.

Comments
Read more about: telangana tourism travel pilgrim spiritual
Other articles published on Mar 10, 2017
We use cookies to ensure that we give you the best experience on our website. This includes cookies from third party social media websites and ad networks. Such third party cookies may track your use on Nativeplanet sites for better rendering. Our partners use cookies to ensure we show you advertising that is relevant to you. If you continue without changing your settings, we'll assume that you are happy to receive all cookies on Nativeplanet website. However, you can change your cookie settings at any time. Learn more
Change Settings Continue