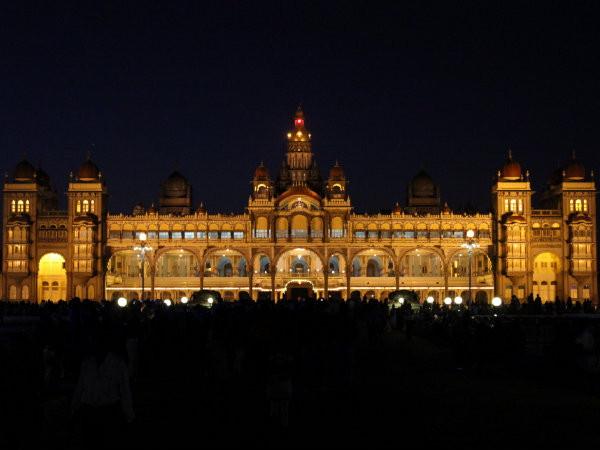 Myore Dasara is one of the most famous celebrations that happen in India during Navratri. When the whole nation celebrates the 9 nine nights dedicated to Maa Durga, Mysore also takes part in the festivities in its own unique way.

Mysore Dasara 2016 comes with a lot of attractions and events to offer to the crowd that gathers from various parts of the country. This year, the theme chosen by the government for the events is "Water Conservation". This is an initiative to go green by promoting ways to preserve the green areas by various methods adopted by the city authorities. The celebrations take place from 2nd to 11th October, 2016.

The celebrations start with a special puja done at Chamundeswari Temple on the Chamundi Hills. This puja is attended by the state officials and Mysore royal family. This auspicious ceeremony will take place around 9am on 2nd October on Chamundi Hills.

Mysore Palace is one of the main attractions during the season. The palace is brightly illuminated for hours on these days, and on the 10th day Vijayadashami, the palace is lit with 97,000 incendescent lamps, making it a sight not to be missed! Several dances and other performances that promotoe the culture, tradition and arts of Mysore are showcased on the palace grounds on these days.

Travellers and tourists come from diferent places to see the colourful festivities of Dasara at Mysore. Dasara exhibition, another attraction of the festivities, is held opposite Mysore Palace and is open for another two months.

The exhibition caters to all age groups with various stalls of food and other products set up by local merchants, along with fun rides and games for kids. The exhibition this year is said to be a plastic-free zone, and bettery operated vehicles will be made available for the physically challenged and the elderly.

Another sight to behold is the grand procession of the Chamundeswari idol that takes place from Mysore Palace to Chamundi Hills. The procession is followed by singers and dancers, decorated elephants, horses and camels. The idol is taken on top of an elephant, which is a sight for which many visitors travel to Mysore during this time.

Here is how to reach Mysore

Some of the hotels in Mysore include Royal Inn Mysore, Sandesh The Prince, The Green Hotel among the rest.

Please leave your suggestions/comments below.