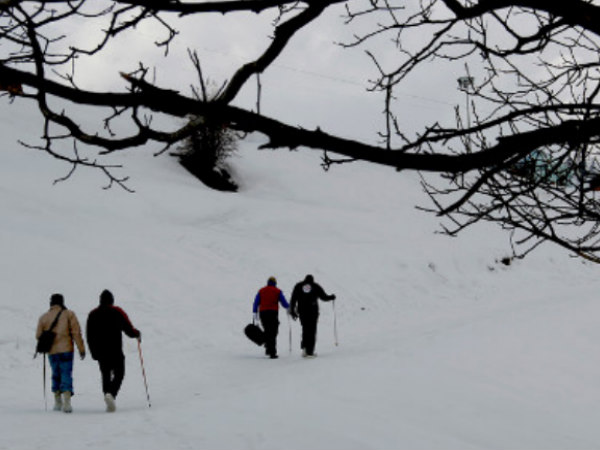 In India only the Himalayan regions and foot-hills of the Himalayas get snowfall. However, who doesn't love to play in snow and make a cute snowman? Winter is one of the favourite times in India too. Many people head to the snowfall destinations to enjoy the magic of winter.

It is also the time for some eccentric winter adventures like skiing and snow boarding. People just love to see the hilly slopes covered in the blanket of snow and skate around these slopes. The snowfall season in India is between December to March. Some places also get snowfall till April. Hence, this time is considered as the peak season for winter lovers in India.

Isn't wonderful to experience the feel of snow? Have a look at these top snowfall destinations in India for an awesome feel!

Gulmarg is a hill-town in the Pir Panjal Himalayas of Jammu and Kashmir. This enticing place is one of the top skiing destinations in India. In fact, Gulmarg plays a double role: it is both a winter spot as well as a summer destination.

Dalhousie is yet another snowfall place in the state of Himachal Pradesh. This hill station was once a summer retreat of the British. Today, it is one of the famous hill stations in North India. There are many tourist attractions to explore in Dalhousie.

Kufri is one of the most famous offbeat hill stations. It is not as famous as Shimla but most prefered by tourists for the quaint ambience it provides. Kufri turns more beautiful with the onset of winter with the snow beautifying the hill station.

Sonamarg is yet another snowfall destination in Jammu and Kashmir. The picturesque Sonamarg valley is called as 'Meadow of Gold' because of its beauty.

Pahalgam is a picturesque place in the Lidder Valley. The pine forests and the hilly slopes gives it a scenic look. Pahalgam turns into a iceland with snow covering the valley.

Auli is one of the best skiing destinations in Uttarakhand. The vast meadows of Auli turns into a skiing spot in the winter season. However, Auli is an year-round destination which gets more visitors during summer and winter.