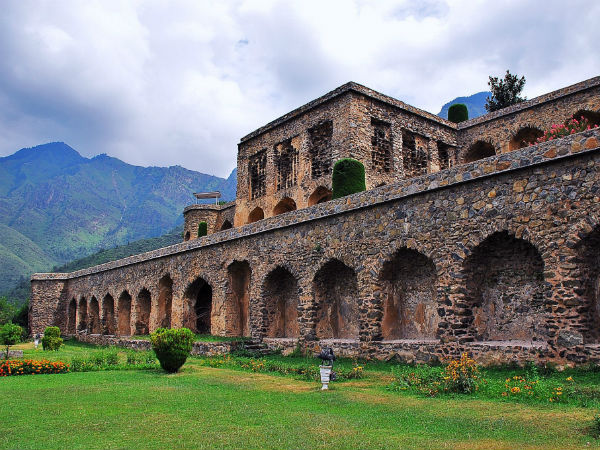 Mughal gardens were with no doubt creations of the royal Mughal Empire, who were thoroughly impressed and influenced by the Persian style of architecture. These gardens follow the same pattern as Persian architecture of Charbagh; of having pools, well-maintained green lawn and canals within a rectilinear walled place.

The man responsible for the Mughal Empire, Babur, was the first one to be influenced into making these kinds of gardens, which can still be witnessed in Lahore, Pakistan. After Babur, the emperor who next took interest in making these beautiful gardens was Shah Jahan. This can be seen even today right outside the beautiful Taj Mahal of Agra, Red Fort, etc.

While Mughal gardens are spread all across the places ruled by the royal dynasty, this article will focus on the 6 Mughal gardens that are dotted across Kashmir.

Literally translating to "abode of love", the Shalimar Bagh was laid out by the Mughal emperor Shah Jahan for his beloved wife Nur Jahan back in 1619. It is the largest garden in Kashmir and is situated on the right bank of the mesmerising Dal Lake in Srinagar.

Shalimar Bagh is a beautiful three-terraced garden with different kinds of gardens and arrangements on each terrace. The garden is flanked with lofty chinar trees, vibrant flowers and houses a waterfall, canal, etc.

The garden remains open from 9 am to 7 pm on all days, except Fridays of every week.

Nestled on the east of Dal Lake, Nishat Bagh is the second largest garden in Kashmir that has a stunning backdrop of the majestic Zabarwan ranges. A charming pool is present in the middle of this 12-terraced garden that is formed by a mountain spring.

Nishat Bagh means "garden of joy" and was created in 1633 under the funds of Asif Khan, elder brother of Nur Jahan. The 12 terraces of the garden are supposed to symbolise the 12 zodiac signs. You can visit the gorgeous garden between 9 am to 7 pm, except on Fridays.

Pari Mahal, or the Abode of Angels, was laid out by Dara Shikoh, son of Shah Jahan in the 1600s. He laid out this beautiful 7-terraced garden on the remains of an old Buddhist monastery, which was later converted into a school of astrology by Dara Shikoh.

It is situated on a hilltop on the Zabarwan ranges, therefore, giving a breathtaking view of the whole of Srinagar city.

Situated 78 km from Srinagar, Verinag is a town in Kashmir that is famous for the striking Verinag Spring. This mountain spur is considered to be the source of the majestic river Jhelum. It is nestled on a foothill with thickets of pine trees covering the pristine turquoise-blue coloured spring.

A beautiful garden was built right next to the spring, by the Mughal emperor Jahangir, which was later beautified even more by his son Shah Jahan.

Nestled on the foothills of Zabarwan mountains, Chashme Shahi literally means "the royal spring". The garden's numerous natural springs were discovered by a female saint named Rupa Bhawani, who was also known as Shahi. Therefore, the garden was named after her.

Apart from the pleasant greenery and colourful flowers that cover the garden, the natural freshwater springs are the obvious superstars of the place.

Surrounded by tall and beautiful chinar trees, Achabal Garden is located 58 km from Srinagar. This garden was built by Nur Jahan herself back in the 1620 AD. A visit to this beautiful garden will be especially pleasing during autumn, when the leaves of all the trees turn golden and red.

Spread across a vast area and perched at a height of 1677 m, Achabal Bagh located a few kilometres from Anantnag is certainly one of the best Mughal gardens of Kashmir.

Comments
Read more about: gardens heritage kashmir jammu and kashmir srinagar nature
Other articles published on Oct 7, 2017
We use cookies to ensure that we give you the best experience on our website. This includes cookies from third party social media websites and ad networks. Such third party cookies may track your use on Nativeplanet sites for better rendering. Our partners use cookies to ensure we show you advertising that is relevant to you. If you continue without changing your settings, we'll assume that you are happy to receive all cookies on Nativeplanet website. However, you can change your cookie settings at any time. Learn more
Change Settings Continue