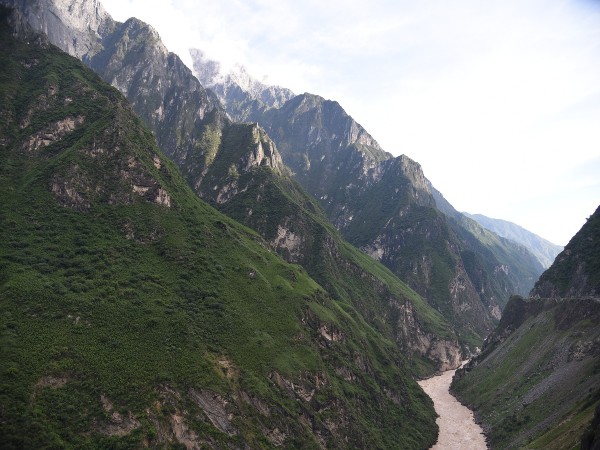 Where the Yangtze, Mekong and Salween Rivers rush side-by-side out of Tibet and south along China's border with Burma, the towering ridge of Yukong Xueshan (Jade Dragon Snow Mountain) forces the Yangtze into an abrupt change of direction known as The Great Bend. It turns north, the mountains close in, and the river enters Hutiao (Tiger Leaping) Gorge, one of the world's deepest.

It is narrowest at its start, where a large rock in the middle defies the ferocity of the torrent in a chasm only 30m (100 ft) wide. This is where a tiger once leapt across it - but its legendary name derives not from tigers' agility, but from their unpredictable savagery. Entering its middle section, the water drops another 100 m (328 ft) without warning. Now at racing speed, whole blocks of water thunder and crash onto sharp outcrops of rock, and you can hear the greedy sucking of deep whirlpools pulling at the air.

The third section of Hutiao's 15 km (9 mi) is even more dangerous and spectacular. The steeply-angled (70 to 90 degree) cliffs rise a sheer 18 to 2,400 m (6 to 8,000 ft) from the water, twisting and turning in a surge of high waves and filling the canyon in a haze of frothing spew. Just looking at it is one of the glories of nature, and you can hike along it in two days (rafting is suicidal).

Beyond the gorge itself, the great Bend continues for about 190 km (120 mi), turning south and east. For experiences rafters, the prolonged wave trains and grade IV rapids are one of the world's greatest six to eight-day expeditions. For everyone, the proximity of the gorge to Lijiang, the cradle of China's traditional Naod and Dongha cultures, justifies including this journey in any top-three wish list.

Duration of the expedition

1-2 days (sightseeing, or actually hiking the Gorge), 8-14 days (seeing the Gorge, and rafting the great Bend, staying at 1,000-year-old Naxi villages and including side trips to some of the best attractions on either bank)

Although it is the same river, above Chongqing the Yangtze is called 'Jinsha' ('Golden Sands')