Nativeplanet
»
Travel guide
»The Matterhorn: The Race To The Summit

The Matterhorn: The Race To The Summit 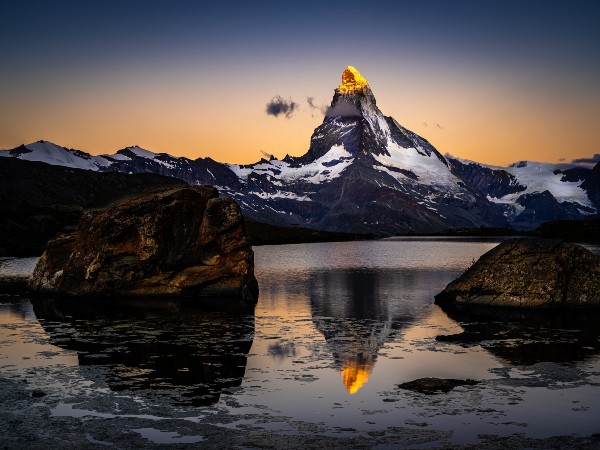 Towering in magnificent isolation above its Alpine surroundings, the Matterhorn is celebrated for its horn - a slightly bent pyramidal peak. It straddles the Swiss-Italian frontier, and in English and German is known as the Matterhorn, in Italian as Monte Cervine and in french as Mont Cervin.

The mountain, 14688ft (4477m) high, is a spectacular remnant of rock slab thrust up by earth movements 50 million years ago when the African and European continents collided. It owes the shape of its peak to Ice Age glaciers that ground out cirques around it. Between the Matterhorn and the Italian peak of Monte Rosa, 15202ft (4634m), lies the Theodul Pass, 1088ft (3317m), from where Servius Galba, Julius Caesar's consul, saw the Matterhorn in AD 55. This may account for the French name Servin.

It was from the Theodul Pass in 1789 that the Swiss Physicist and geologist. Horace Benedict de Saussure, who had earlier scaled Mont Blanc, contemplated climbing the Matterhorn. But he felt that: 'Its precipitous sides, which give no old to the very snows, are such as to afford no mean of access.'

An English wood engraver, Edward Whymper, was to prove him wrong. He made seven unsuccessful attempts to climb the Matterhorn from the Italian side between 1861 and 1863, but in 1865, at the age of 25, he decided to try from the Swiss side. Whymper asked the well-known Italian guide, Jean-Antonie Carrel, to go with him, but Carrel had already been engaged by the Italian Alpine Club, also preparing for an assault on the Matterhorn.

The Race To The Summit

Whymper moved fast. With 18-year-old Lord Francis Douglas, he enlisted the aid of Peter Taugwalder, a renowned Zermatt guide who thought that the fore-shortened view of the Matterhorn ridge from the Swiss side made it look steeper than it is. Others in the party were Taugwalder's son Peter, aged 22, Micheal Croz, 35, a guide from Chamonix, the Reverend Charles Hudson, 37, and 19-tear-old Robert Hadow.

The party set off from Zermatt in the morning on July 13. The going was good and at 11,000ft (3350m) they made camp. The next day they reached the summit in the afternoon after a relatively straightforward climb. From here they were able to see their Italian rivals still about 1000ft (300m) below. Realising they had been beaten, the Italians abandoned the climb. Whymper and his companions stayed for an hour at the summit.

In Scrambles amongst the Alps, written in 1871, Whymper described the view: 'The atmosphere was perfectly still, and free from all clouds or vapours. Mountains fifty - nay, a hundred - miles off, looked sharp and near. All their details - ridge and crag, snow and glacier - stood out with a faultless definition.'

The descent was slow and tricky and as the party began to negotiate a particularly difficult section, tragedy struck. Hadow slipped and fell against Croz, and the two men began to slide downwards, dragging Hudson and Douglas with them. The rope snapped and the four men disappeared over the precipice onto the Matterhorn Glacier 4000ft (1200m) below. Three of the bodies were recovered the next day, but Lord Francis Douglas was never found.

Today, climbers can use the huts, ropes, cables and footholds provided, and about . But it remains awesome, and accidents still occur - up to 15 climbers die every year.