The Holy Shrine Of Kanaka Durga At Vijayawada 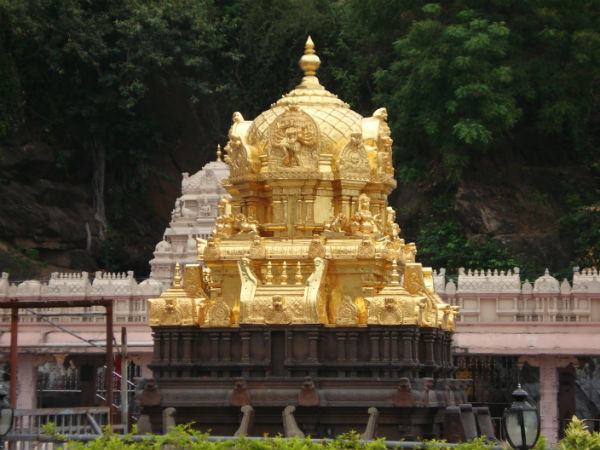 The shrine of Kanaka Durga at Vijayawada is the abode of the goddess of power, riches and benevolence, she is also considered as the presiding deity of Vijayawada and is visited by lakhs of pilgrims especially during Navratri. This ancient shrine is located atop the Indrakeeladri hill on the banks of river Krishna and is bound by legends.

The idol of the goddess and Shiva are self-manifested ones, the uniqueness of the shrine is that Durga Devi is seated on the right-hand side of Lord Shiva, which is quite different from other shrines, where one would find the goddesses are seated on the left side of their consorts. This showcases that the goddess is predominant here.

The Asura Who Turned Himself Into A Mountain

Long ago there was a demon named Keela who had been performing a severe penance for Durga Devi. The goddess was pleased by his penance and appeared before him and asked him for a boon. The asura was so delighted and told the goddess that his desire was that she should always remain in his heart.

The goddess agreed to it and said that he should remain there, at the plains of river Krishna, in the form of a mountain, and after the assassination of demons in the Krithayuga, she would remain in his heart. Keeping to her word, Durga killed Mahishasura and arrived at the Keela mountain and dwells in the heart of the mountain as promised.

According to Mahabharatha, Arjuna undertook a penance to please Lord Shiva to get his weapon, Pashupatastra. It is said that, the one who has the weapon would be victorious over his enemies. Pleased by the devotion of Arjuna, Shiva appears to him in the disguise of a hunter and Parvathi as a huntress.

Shiva began his hunt by chasing a wild boar atop the Indrakeela mountain, which also happened to be the same place where Arjuna was meditating. The boar came towards Arjuna and he shot an arrow towards it, which hit the boar around the same time when Shiva's arrow to hit it. Both Shiva and Arjuna staked their claim over whose arrow killed the boar and very soon words led to a physical quarrel.

Before he began the fight, Arjuna is said to have made a Shivalingam out of mud to offer his prayers. To his shock the flowers which he offered to lingam fell over the hunter and he came to the realisation that the hunter and huntress were none other than Lord Shiva and Parvathi. Soon Shiva and Parvathi took their original forms and handed over the Pashupatastra to Arjuna and blessed him.

Navratri At The Shrine

The shrine is home to a beautiful idol of the goddess which measures 4 ft in height and is decked with fine jewellery. Durga Devi is depicted as having eight arms, each holding a weapon in a standing posture over the demon Mahishasura piercing him with her trident.

As all other Devi temples, Navratri is an important festival which is celebrated here. The deity is portrayed in different manifestations during the festival, which attracts lakhs of pilgrims to the shrine, who come to get the blessings of the goddesses during these auspicious days.