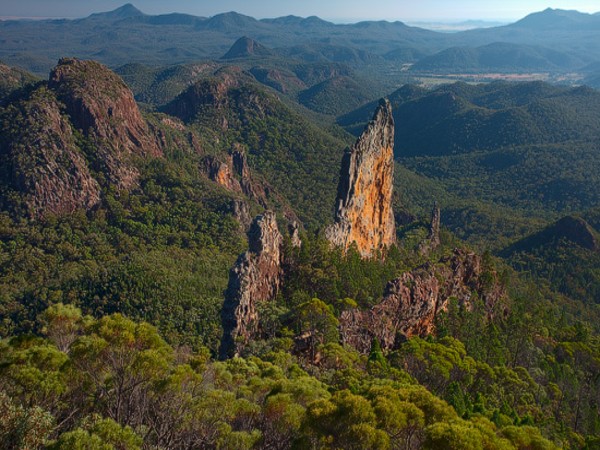 A narrow blade of rock stabs the clear air of the Warrumbungles - a range of mountains in New South Wales. Aptly called the Breadknife, it reaches skywards to a height of 300ft (90m), yet its summit is only about 3ft (1m) thick. The Breadknife is the most dramatic of several spectacular landforms in the thickly forested Warrumbungles.

Whose name means 'crooked mountains. Rocky columns and spires rise abruptly from the surrounding plains, and tower above domes and ridges dissected by deep gorges. An early European explorer, Yorkshire-born John Oxley, described them as 'A most stupendous range of mountains, lifting their blue heads above the horizon.'

The origins of the Breadknife go back to volcanic upheavals that were at their peak between 17 and 13 million years ago, Lava filled cracks to form walls of solidified lava embedded in rock. Millions of years of erosion have since worn down the rocks, but the solidified lava walls proved more resistant to the forces of wind and weather. The Breadknife now stands as a remnant of one of these walls, stripped of the rock in which it was embedded.

The Warrumbungles are often referred to as a place where the east meets west, because of the contrasting climate on the opposite sides of the mountains. To the north and west, the mountains slope down to hot, dry plains. On these sunny and driver slopes grow shrubby trees such as the quandong, which has edible bright red fruits. The cooler, wetter southern and eastern slopes are dominated by forests of tall eucalyptus trees and flowering shrubs. Sundews grow in damp spots in the forests, along with ferns, orchids and wonga vines with tubular, purple-throated flowers.

Parrots screech and dart around the forests. Red-rumped parrots from the inland plains join rosellas from the eastern coasts and mountains, lorikeets and pink and grey galahs to make up a brilliant kaleidoscope of colour. At ground level, the flightless emu breeds in the seclusion of the northern grasslands, ready to make a long-legged dash for cover when disturbed.

Grey kangaroos abound in the more open areas, and koalas and the common brush-tailed possums live in the treetops. To move from tree to tree, koalas descend at night, cross the ground and scale another tree. Possums, however, climb from one tree to another, using the flap of the skin between their front and hind limbs as wings.

For unknown numbers of years, the Warrumbungles were part of the territory of the Kamilaroi people who lived in the adjacent plains. They gathered berries, roots and wild bees' honey, and hunted kangaroos, emus and wildfowl. But when European settlers arrived these Aborigines were moved on, leaving little to tell of their former presence, although a cave high on a hillside contains boulders with grooves created by axe-grinding. A rock shelter nearby held remains of organic material, which showed that macrozamia seeds - once a staple part of the Aborigines' diet - had been prepared there.