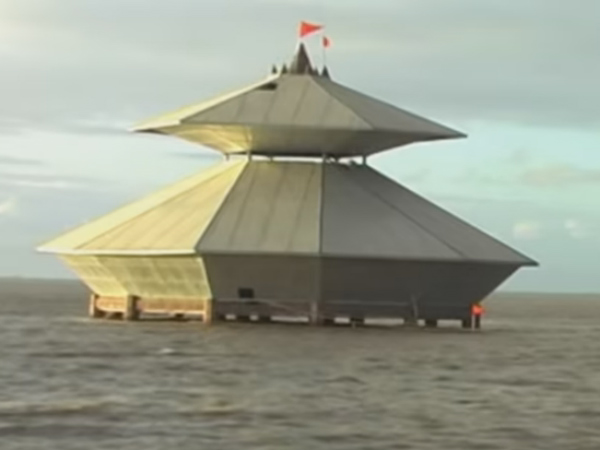 Sometimes it is not just devotion which takes us to a temple. Not that we are not religious but some unique events pull us towards it. Similarly, here is one temple of Shiva which goes through an interesting spectacle on a daily basis.

Stambeshwara Mahadev Temple in Gujarat is one of the incredible places to visit in the state. It is unique because it submerges everyday and again reappears. Yes, Stambheshwar Mahadev Temple is famously known as the Disappearing Shiva Temple in India.

One should visit this place to see this extravaganza of nature. Stambheshwar Mahavdev is an ancient temple situated in the town of Kavi Kamboi. The shrine is located between the shores of the Arabian Sea and the Bay of Cambay in Gujarat.

Everyday, this Shiva Temple gets submerged in water during high tide hours and again reappears when the tide level comes down. Again it will be open for the public. People from across the country come here to watch this amazing sight.

According to the mythology, this Shiva Ling was installed by Lord Kartikeya himself. One story says that, Lord Kartikeya (Shiva's Son) feels guilty after killing the demon Tarakasura. So, Lord Vishnu consoled him saying that it was not wrong to kill a demon who lived by troubling the common people. However, Lord Kartikeya wanted to absolve his sin of killing a great devotee of Shiva. Hence, Lord Vishnu adviced him to install Shiva Lingas and pray for the forgiveness.

How To Reach Kavi Kamboi

By Train: Vadodara Railway Station is the nearest railway station to Kavi Kamboi

Note: Temple website www.stambheshwarmahadev.com mentions the opening hours of Stambheshwar Mahadev Temple. However, it is better to give a whole day to witness the temple submerging in the sea and again coming back to its original state. Many people go to witness this interesting sight.

Therefore, Stambheshwar Mahadev Temple is one of the strange Shiva temples in Gujarat. Don't miss out on a visit to this interesting place.