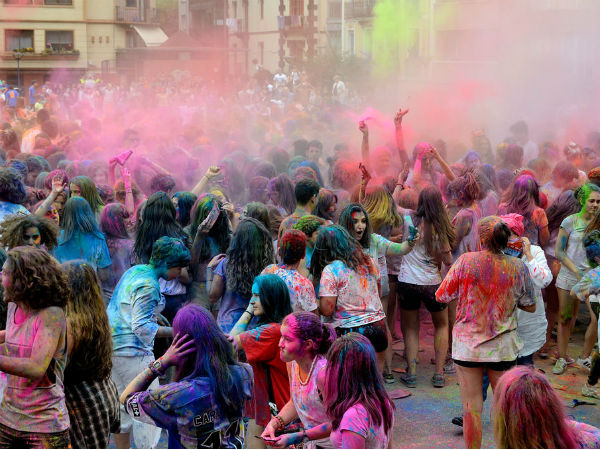 Being a melting pot of innumerable traditions, cultures and heritage, India is a joyful country that celebrates so many beautiful festivals every year. While certain festivals like Diwali or Navratri are celebrated throughout the country, some festivals are exclusive or celebrated with a much higher importance in certain regions.

Every region has its own festivals and religious significance attached to them. Out of the many, read about the five resplendent festivals that are celebrated with the greatest grandeur in North India.

Holi is a boisterous festival that is celebrated in most parts of India, but it is a celebration done with utmost grandeur in various forms particularly in North India. The festival is famous enough for the entire world to relate playing with colours to India, since that is what Holi celebration is mostly about.

Lath mar Holi is a very famous celebration that takes place in the small town of Barsana in Uttar Pradesh. Playing with water and colours, forming human pyramids and breaking a pot of butter tied on the top are some of the many events that take place during Holi. It falls in the month of March every year.

Mainly celebrated by Sikhs, Baisakhi or Vaisakhi is a festival that takes place during the month of April every year. It commemorates the formation of Khalsa, the time of harvest and acts as the mark of the New Year for the followers of Sikhism.

Bhangra, the popular Punjabi folk dance sees its origin from Baisakhi. It was a dance form that began to celebrate the harvest festival; therefore, celebrations compulsorily include Bhangra performance.

Kumbh Mela is a festival where mass Hindu pilgrimage takes place in one of the following places every 12 years-Ujjain, Allahabad, Nashik and Haridwar. The festival is celebrated once in a period of 3 years between the 4 places, where Hindu devotees bathe in holy water.

Apart from cleansing from a bathe in holy waters, the grand festival of Kumbh Mela involves devotional singing, feeding of thousands of holy men and women, etc. It takes place for an entire month, mostly during April.

It takes place mostly during the monsoon month of July. It is also a celebration of the reunion of Lord Shiva and goddess Parvati. Women exercise fasts for the long lives of their husband during Teej.

PC: University of the Fraser Valley

Celebrated by both Hindus and Sikhs, Lohri is a winter festival celebrated mainly in Punjab. It usually falls on 14th January, which marks the end of the winter season.

The festival is celebrated by making a bonfire and having classic traditional food of Punjab like sarson ka saag, makki di roti and food made out of jaggery, groundnuts, etc.The celebrations are accompanied by Bhangra, folk songs exclusively sung during Lohri, etc.

Comments
Read more about: north india festivals punjab holi heritage pilgrimage
Other articles published on Oct 3, 2017
We use cookies to ensure that we give you the best experience on our website. This includes cookies from third party social media websites and ad networks. Such third party cookies may track your use on Nativeplanet sites for better rendering. Our partners use cookies to ensure we show you advertising that is relevant to you. If you continue without changing your settings, we'll assume that you are happy to receive all cookies on Nativeplanet website. However, you can change your cookie settings at any time. Learn more
Change Settings Continue