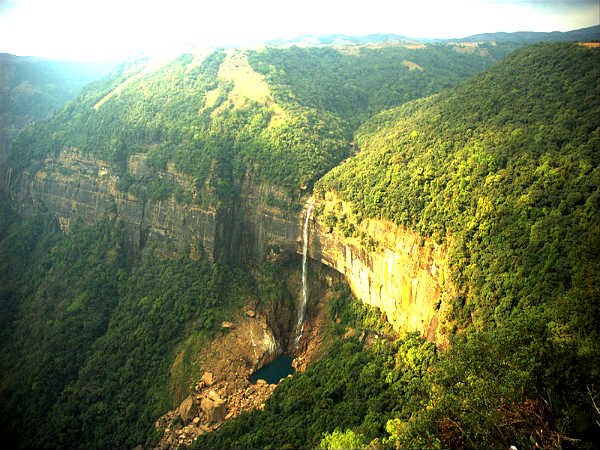 The seven north-eastern states of India are known for their scenic beauty as well as their rich cultural heritage. Moreover, these states, popularly known as the ‘seven sisters of India', also boast of having abundant natural resources such as the vast stretch of greenery, the mountain ranges, lakes, caves and also some of the country's most spectacular waterfalls.

The state of Meghalaya is not only famous for Cherrapunjee, the place which receives the highest rainfall in the world, but also renowned for having some of the most beautiful waterfalls in north-eastern India. Most of these waterfalls can be seen at the East Khasi Hills district of Meghalaya.

Enjoy reading more about some of the most spectacular waterfalls of Meghalaya here.

Located near Cherrapunji in Meghalaya, the Nohkalikai Falls is renowned as the tallest plunge waterfall in the entire country.

Falling from a great height of 1100 feet, this falls forms a beautiful pool of green coloured water below. There is a local legend which says that this waterfall got its name from a tragic incident where a woman named Ka Likai jumped to her death from a cliff near the falls.

Situated in the West Khasi Hills district of Meghalaya, the Langshiang Falls has a height of about 1,106 feet, making it the fourth highest waterfalls in India. This falls is created by River Kynshi and offers an amazing view to the travellers. Visitors can also pay a visit to Nongkhnum Island which is Meghalaya's biggest river island, when they are at Langshiang Falls, as it is just about 10 km away.

Yet another mesmerising waterfalls that can be seen at the East Khasi Hills District in Meghalaya is known as the Kynrem Falls. Situated at a distance of about 12 kilometers from Cherrapunji, the Kynrem Falls can be seen inside the Thangkharang Park, from where the visitor can enjoy a great view of the falls. The falls has a height of 1,001 feet and is regarded as the seventh highest falls in India.

A three-tiered waterfalls located at the capital city of Shillong in Meghalaya is called as the Bishop Falls. At a height of 443 feet, this falls is regarded as the 22nd highest waterfalls in India. There is another falls known as the Beadon Falls here which is often said to be the twin falls of the Bishop Falls, as both of them fall into the same gorge.

Being the fourth highest waterfalls in the entire country, the Nohsngithiang Falls is also termed as the Seven Sisters Waterfalls and the Mawsmai Falls.

Situated near the Mawsmai village in East Khasi Hills District, the Nohsngithiang Falls is definitely a treat to the visitors eyes, as it falls from a mighty height of 1,033 feet. This waterfalls is best to be seen during the rainy season.

On your next trip to the state of Meghalaya, make sure that you do not miss out on visiting these spectacular waterfalls!

Comments
Read more about: waterfalls north east india meghalaya
Other articles published on Aug 28, 2013
We use cookies to ensure that we give you the best experience on our website. This includes cookies from third party social media websites and ad networks. Such third party cookies may track your use on Nativeplanet sites for better rendering. Our partners use cookies to ensure we show you advertising that is relevant to you. If you continue without changing your settings, we'll assume that you are happy to receive all cookies on Nativeplanet website. However, you can change your cookie settings at any time. Learn more
Change Settings Continue