Nativeplanet
»
Travel guide
»Skeleton Coast: The Most Dangerous Coastline In The World

Skeleton Coast: The Most Dangerous Coastline In The World 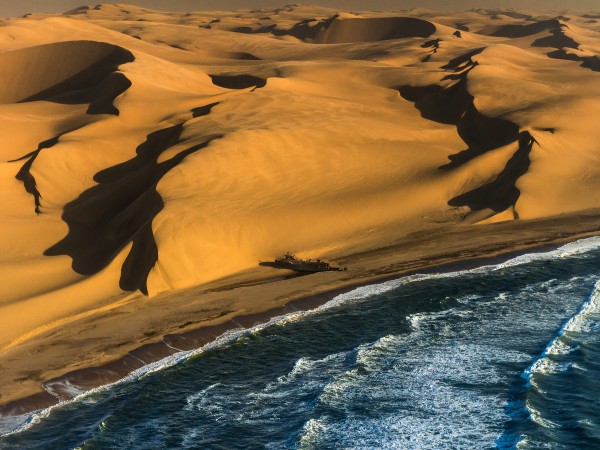 A wilderness of white sand lies between the ancient Namib Desert and the cold waters of the Atlantic Ocean in Africa. 'The coast of hell' Portuguese seafarers called this stretch of Namibia's shoreline. Now it is far-famed as the Skeleton Coast.

Stretched out as if on a rack, the 300 miles (500km) of the sun-tortured shore is infernal, unforgiving, and in its pure desolution, extraordinarily beautiful.

When the Swedish explorer and naturalist Charles John Andersson visited the coast in 1859, 'a shudder, amounting almost to fear' came over him. 'Death', he exclaimed, 'would be preferable to banishment in such a country.'

From the air, the skeleton Coast is furrowed by a million golden dunes that sprawl north-eastwards from the Atlantic to the gravel plains of the hinterland. Between the dunes, shimmering mirages rise from bleak pavements of desert rock, the last remnants of a land surface buried by sand that can travel up to 16yds (15m) a year. Around the mirages, the restless dunes rumble and roar in an extraordinary symphony conducted by the wind.

All along the skeleton Coast, treacherous crosscurrents, gale-force winds, creeping fog and reefs whose jagged fingers reach deep into the sea have taken a devastating toll on ships.

The Stories and Legends

Stories are a legion of wrecked survivors staggering ashore, joyful to be alive, only to become victims of a slow, sandblasted death. The wreckage of ocean liners, tugs, gunboats, galleons, trawlers and clippers lies strewn from one end of the Skeleton Coast to the other.

Twelve headless skeletons lying together on the beach, and the skeleton of a child lying in a nearby abandoned but, were discovered on the coast in 1943. A weatherbeaten state nearby bore the message. 'I am proceeding to a river 60 miles north, and should anyone find this and follow me, God will help him.' The message was written in 1860.

To this day no one has discovered who the tragic victims were, how they came to be wrecked on the coast and why they were headless when found. In November 1942, the 'Dunnedin Star,' a British cargo boat carrying 21 passengers and 85 crew, foundered on rocks 25 miles (40km) south of the Kunene River. All the passengers, including three babies, and 42 crewmen were put ashore in a motorboat.

In one of the most difficult rescues ever staged, it took nearly four weeks for all the castaways and crew to be found and taken safely back to civilisation, The rescue involved two overland expeditions from Windhock in Namibia, three Ventura bombers and several ships. One of the rescue ships itself ran aground and three of its crew drowned.

The Skeleton Coast received its name when a Swiss pilot, Carl Nauer, crashed somewhere along the coast in 1933 while he was flying from Cape Town to London. A journalist suggested that his bones might one day be found on the 'Skeleton Coast'. Nauer's remains were never recovered, but the name stuck.

At night, when the wind subsides and the desert cools, nature looks down on this tortured land with compassion and sends a ghostly fog rolling inland. The fog penetrates the dunes, and the tiny creatures of the Skeleton Coast emerge from the sand to gather water from the fog - the only moisture they will ever receive.

When the new day arrives the miracle of desert life continues. Grant's golden mole, a little longer than a finger and blind, swims deep into the sand, pouncing on crickets, beetles or geckos as they seek refuge from the sun. A cauricara beetle starts unfolding its stilt-like limbs to bring its body as high as possible off the ground, which protects it from the scorching ground temperatures, and exposes it to the relative coolness of the desert breeze.