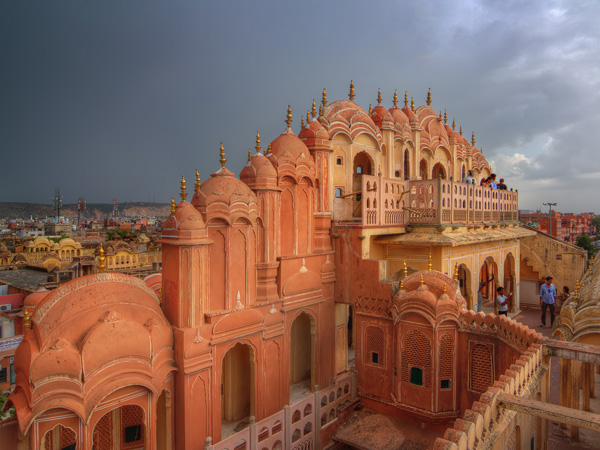 There are many places in the world that leave you awestruck with their background and history but there is no other place like Jaipur which stands tall with its rich history even when we are moving to a digital age. Jaipur, in a way, is like Japan. Marrying the new but still keeping the old traditions firm. Jaipur is known for its beautiful artisans, colourful markets, dry climate and its palaces. The rich city of Jaipur comes with a regal past. For centuries, the land was ruled by kings and princes, and now it is taken over by the people of India, a democratic civilization. It is interesting to see how far we have come in India, still clutching together our history and looking right into our future. Jaipur is that city that teaches you how to live the most of your past and your future. Even if you're a history buff or not, you're bound to fall hard in love with this city of maharajas... Here, we present the 6 things that you can do in Jaipur to make the most out of your visit here.

This is the one thing about Jaipur that you absolutely don't want to miss. Shopping and a Jaipur-visit go hand-in-hand... The markets over here are everything but dull. The colours, patterns and the perfectionist artistry are bound to take your breath away.

Jaipur is known for its brilliant artwork and handicrafts and at Jowhari Bazaar, you get everything that speaks truly of Jaipur artwork. From finely-printed shawls to leather juttis (shoes), you'll be tempted to buy all of it. Besides the hustle-bustle of Jaipuri markets, you'll also get to see how these markets have been housed in the old palaces.

Once that used to be a beautiful palace now is home to a millions of ateliers. The entire city is orange (or as they say pink) and you'll see the finesse of architecture, too.

2. Explore The Ruins Of Amer Fort

It is said that a ghost of an old queen still lives there but don't let these rumours trick you from visiting his beautiful and magnificent century-old castle that is housed beautifully in the top of a hill, overlooking the rest of the city. It's a bit far from the city, 11 kms drive from Jaipur.

The story of the fort is dated back to Raja Man Singh's rule. The fort was originally built by Meenas. The stone crafting in the marble is so brilliantly done that it hard to believe that such kind of artistry can be found anywhere else in the world. The palace stands tall in the range of Aravalli Hills.

Jaipur might not have a film city like that of Mumbai but it has its own charm when it comes to cinema and that is Raj Mandir Cinema, the age-old theater entertaining millions of people for years now.

Even the foreigners come to watch movies at this place just to see what the entire buzz is about. And the buzz is its huge gigantic regal built. It looks more like watching a movie in a palace rather than theater. The grandiose of the place is pleasing to the eyes and makes you feel like a royalty.

4. Get Religious At Birla Mandir

Birla Mandir in Jaipur is the hottest pilgrim of all the religious people but if you don't fall on the religious side, you can still go there to check out the beautiful-built of this structure. Made out of pure white marble stones, Birla Mandir boasts about Rajasthan's galore of marbles.

There are many other temples near Birla Mandir which you can visit. The street is full of vendors selling flowers, incense and other puja things. The area is mostly famous for Lord Ganesha temples but Birla Mandir is dedicated to Lord Vishnu and his wife goddess Lakshmi.

5. Shop At The World Trade Park

The one of its kind mall boasts about its vastness. Even if you're not much of a shopaholic, you can visit this mall just to see its modern architectural finesse. It features a display system where 24 projectors reflect a single image on its ceiling. Interesting, isn't it?

It even bagged an award for being the best mall of the year. Interestingly, it is the second largest mall in India and was inaugurated by the famous Bollywood star, Shahrukh Khan. Now if it takes a Bollywood star to come from all the way to Mumbai to inaugurate the mall, it surely does make a must-visit place.

6. Find The Ghost At Bhangarh Fort

Many say that the fort is haunted by a princess named Ratnavati but the real story is that it was built Man Singh I for his younger son. The old ruins of this castle still flaunt its regal nature. The fort comes with many legendary stories that are told to everyone who ever grew up in Rajasthan.

The place is looked down upon as a ghostly castle and that's why any stay away from the palace the sundown. But ghost or not, we believe that everyone should visit this palace just to see how beautiful our history was.

There are many ways to reach Jaipur. It's the capital of the state of Rajasthan and hence the actively connected to all three routes: air, rail and road.

By Air: Jaipur International Airport is the closest airbase, which is located in the suburban area called Sanganer and it is 13 km away from the Jaipur City Center. It is well connected to important cities of India like Bangalore, Mumbai, Kolkata, etc.

By Rail: The closest railway station in Jaipur is the Jaipur Junction Railway Station. It is well connected to all the important cities like Delhi, Bangalore, etc., and even the small towns.

By Road: The distance between Jaipur and Delhi is about 260 km, i.e, 5 hours by road which makes road trips a popular activity on the Delhi-Jaipur national highway. Besides Delhi, Jaipur is also well connected to the smaller towns of Rajasthan and neigbouring states. You can easily catch a government or a private bus at any hour of the day.

The best time to visit Jaipur is during the winter months, from early November to February.

Comments
Read more about: jaipur rajasthan travel india forts palaces history
Other articles published on May 3, 2018
We use cookies to ensure that we give you the best experience on our website. This includes cookies from third party social media websites and ad networks. Such third party cookies may track your use on Nativeplanet sites for better rendering. Our partners use cookies to ensure we show you advertising that is relevant to you. If you continue without changing your settings, we'll assume that you are happy to receive all cookies on Nativeplanet website. However, you can change your cookie settings at any time. Learn more
Change Settings Continue