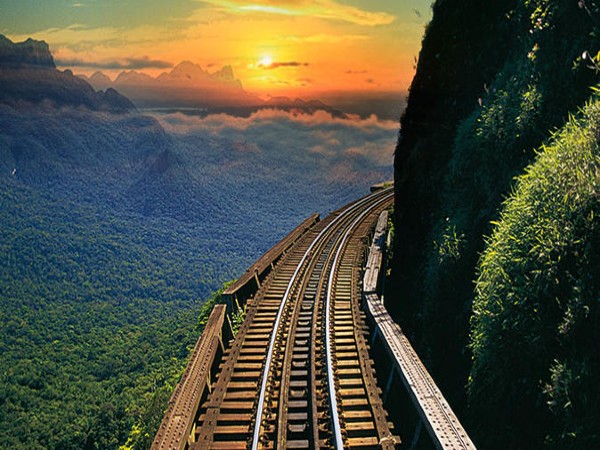 The Serra Verde Express takes you from Curitiba in Southeastern Brazil to Paranagua on the coast. It's the most spectacular train ride in Brazil. Forty minutes after you leave the high-rise modernity of Curitiba and the conventional drab of its suburbs, you emerge from the first tunnel into the completely unexpected, revelatory world of the Serra do Mar. Buckled like a concertina into a series of soaring peaks and precipitous valleys, the Serra do Mar drops 900 m (2,950 ft) from Curitiba to the delicate old colonial town of Morretes at sea level.

These mountains form the largest and best-preserved slice of Brazil's pristine Atlantic rainforest, protected as the UNESCO World Heritage Site and Biosphere Reserve of Marumbi. The dense forest of banana trees palmetto, hardwoods, orchids and creeper vines are slotted with rivers and waterfalls and are alive to the colour and movement of toucans and monkeys. Winding through these steep worlds within worlds, the train crosses 37 impossibly high girder bridges, and 13 major tunnels blasted through rock.

If you sit on the left side of the carriage, you'll see the best of the staggering panoramas that change at every turn, and smell the sweet air that grows balmier as you descend.
There are two kinds of Serra Verde Express. The smart, expensive version is the weekend-only air-conditioned 'Litorina', which halts in the mountains for photo opportunities, but does continue to Paranagua. It's always crowded. On weekdays, the third-class 'Convencional' chugs as far as Morretes but stops at Marumbi (Km 59) for visitors to the Reserve. It's a working train - a passenger equivalent of the great freight trains that still haul produce out of the mountains to the sea. There is no on-board service, but at the frequent unscheduled halts, people offer you coffee, fruit, pastries and bottles of local banana liqueur through the window.

On the crowded weekend and holiday trains, vendors will try and sell you souvenirs through the train window - when all you really want is food or drink. Travel with the workers.