Nativeplanet
»
Travel guide
»Sarnath - Walking Alongside The Footsteps Of Buddha

Sarnath - Walking Alongside The Footsteps Of Buddha 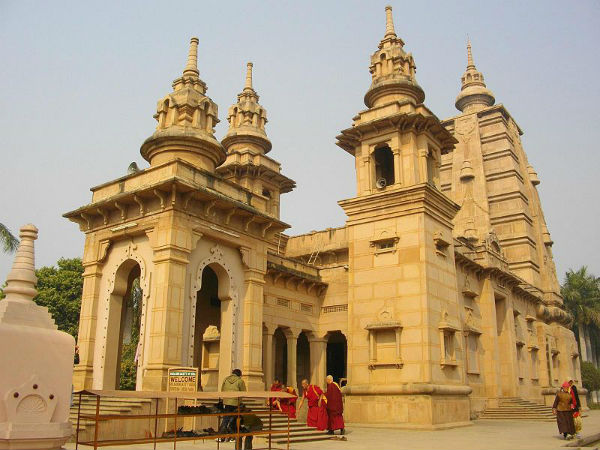 Located at a distance of 13 km from the spiritual city of Varanasi, Sarnath is the holiest site of Buddhism. It houses the place where Lord Buddha preached his first sermon. Later on, Ashoka erected the famous pillar to commemorate this incident.

Sarnath is known for its peaceful environment, serene atmosphere and the exquisite architecture of Gupta and Mauryan age that signifies ancient history in its purest form.

The numerous invasions from Central Asia had left most of the Stupas and temples in ruins and that fact itself makes the journey of history complex to appreciate in its own terms. The shades of invasion still lie in the remnants of this peaceful place.

The summers in Uttar Pradesh are hot and scorching. The day temperature sores up to 40°C and therefore tourists are advised to avoid the summer season while travelling here.

The rains provide some respite from the heat during the monsoons but the sultry atmosphere lingers on until the start of October. The winters range from October to March and these months are considered the best time to visit Sarnath. The cold winds are chilly and sometimes laden with dense fog. This is to be considered in account while making a visit.

How To Reach Sarnath

Since the ancient times, Sarnath has been the holiest site for Buddhist pilgrims and therefore even in those days transport was not a major issue. Today Sarnath lies in close proximity to the bustling city of Varanasi and is linked to all other major cities by road, rail and air.

By air: The nearest airhead is Varanasi and from here flights are connected to major parts of the country. From Varanasi, you can hire a public bus or taxi to reach Sarnath.

By rail: Sarnath is a small station that is linked to the Varanasi-Lucknow rail route. Major trains haul at Varanasi or Mughalsarai from where local trains make regular journey to Sarnath.

By road: A 10 km-road links Varanasi with Sarnath and taxis and public vehicles are in abundance travelling to the destination.

Believed to have been built in 500CE, the Dhamekh Stupa was order to be built by Ashoka. It is the site where Buddha preached the Eightfold Path of enlightenment. The diameter of the monument is of a formidable 28 m and is housed around lush green manicured gardens. The area around it is so peaceful that it instantly rejuvenates the soul away from the bustling cities and infrastructure.

The Dhamekh Stupa is built partly of bricks and stones and is surrounded by the ruins of old monasteries where Buddha is believed to have stayed during the monsoons after delivering his first sermon.

The Chaukhandi Stupa stands as a lofty mound of brick which has been partly eroded. The square edifice stands surrounded by an octagonal tower. Believed to have been also built by Ashoka, it is the very sire where Lord Buddha met his disciples while travelling towards Bodh Gaya.

A little walk ahead from the Stupa, lies the Statue Of Standing Buddha soaring at a height of 80 ft above ground. It is the tallest standing statue of Buddha in India and represents the eternal friendship and cultural ties of Thailand and India. The statue is located in the premises of the Thai temple and is made up of 815 stones. An ornamental garden surrounds the statue and the temple premises and is a perfect place for meditation and spiritual awakening.

Mahabodhi society commissioned the construction of this modern temple. Japan's foremost painter, Kosetsu Nosu rendered the excellent frescoes for this place. The Mulagandha Kuti temple lies as brick ruins all over the place. Images and detailed descriptions will guide you through the history of this temple.

The lion capital or the Ashoka pillar has been adopted as the emblem of India was erected here by Ashoka on the word of his first wife, Vidisha Devi. It marks the first spot of Buddha's sermon. The pillar speaks the value of ‘truth alone triumphs'.

The Emblem consists of four Asiatic lions standing back to back - which symbolize power, confidence, pride and courage - mounted on a circular base. The bottom of the pillar has a bull and a horse with a wheel (Dharma Chakra) at the centre. The pillar is at display at the Varanasi Sarnath Museum.