Nativeplanet
»
Travel guide
»Sariska - A Mystery In The Wild

Sariska - A Mystery In The Wild 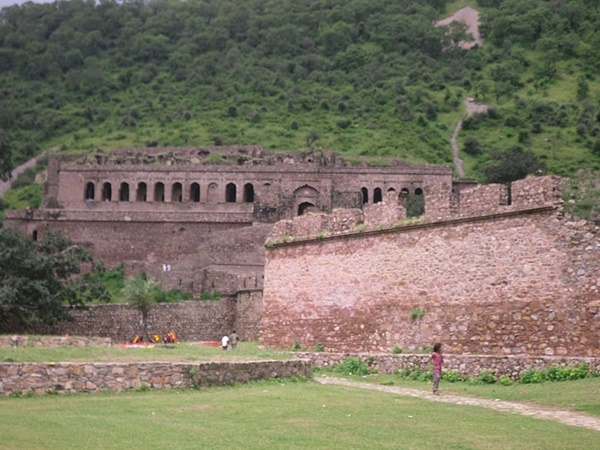 Nestled among the Aravalli range in Rajasthan, Sariska is popular for its tiger reserve and spooky medieval forts. Comprising an area of 800 sq km, the area is divided into dry deciduous forests, rocky landscape, steep cliffs and grasslands.

The Sariska National Park was once a royal hunting ground. The ruins of various forts and medieval houses spread all over the place are a testimony to the fact.

The place is much more than a wildlife destination. It reveals some of the complex architecture of the past and houses some terrifying mysteries. The spiritual mythological encounters also form a part of the local folklore here. The beautiful lakes of Sariska are a perfect place to sit on the banks and enjoy the spooky encounter and spiritual experience among friends and families.

The national park is an idyllic escape for tourists seeking tranquillity and peace in the wild. It is thus of no doubt that the memorable journey will reveal to you the inner beauty of Rajasthan.

Sariska remains a popular attraction during all parts of the year. The summers are hot and scorching and you might avoid that. The best time to visit the National Park is during the months of October to March. The park remains open on all days from 8:00 am to 6:30 pm and is closed on listed national holidays.

How To Reach Sariska

By air: The nearest airport is Jaipur which is 107 km from Sariska. State buses and private transport is readily available from the airport at all hours.

By rail: Alwar is the nearest major railway station located 37 km away from Sariska. Trains connect from Alwar to major parts of India and other areas of Rajasthan.

By road: The Delhi-Alwar-Jaipur road connects Sariska to nearby major cities of Jaipur and Delhi.

The tiger reserve of Sariska is the primary reason to be here. It is considered to be one of the top wildlife destinations of the country. The beautiful environs of the National park are soothing to the eyes and to the frayed nerves of an urbanite. The park is home to the Royal Bengal Tiger, Hyenas, Chinkara, Nilgai, Sambar and many other animals. Verdant forest covers and shimmering water bodies are an ideal ingredient for a thrilling safari. The jeep safaris take you deep inside the jungle to encounter the wild in their habitat.

Listed as one of the most haunted places of India, The Bhangarh fort is located at the borders of the national park at a distance of 30 km. The ruins of the fort and its inner settlements are preserved till date. The story associated with Bhangarh is about a wizard who fell in love with the princess of the fort. His evil intentions then came to be known to the princess who later spurned him inside the premises of the fort.

The place is said to be haunted with the souls of the princess and the wizard roaming at night. It is, therefore, said that nobody should remain in the premises of the fort after sunset. Apart from the spooky element, the fort is serene and peaceful. It stands as a silent testimony to the marvellous architecture and mysterious charm of the place.

This small yet beautiful fort lies deep inside the Sariska tiger reserve. A jeep can be hired to visit this fort. The inaccessibility of this marvellous fort is the reason why Aurangzeb sought this place to imprison his brother Dara-Sikhoh. The fort offers an amazing view of the sunset that renders a crimson tinge to the deep green canopy of the reserve.

This man-made lake is flanked by mountains from all sides providing a panoramic view of the lush green valleys. The shimmering waters are perfect for boating and spending romantic dates on its banks. The lake was commissioned by Maharaja Vinay Singh and also houses a palace dedicated to the memory of his wife.

This is a must visit place for mythology lovers. The place is said to be the encounter site of Bheema and Hanuman during the Mahabharata times. It was at this site where Hanuman shattered the ego of Bheema. A temple was later constructed nearby dedicated to Lord Hanuman.

Comments
Read more about: rajasthan
Other articles published on Jun 12, 2019