'Hide and Seek' Temple in Kurnool! 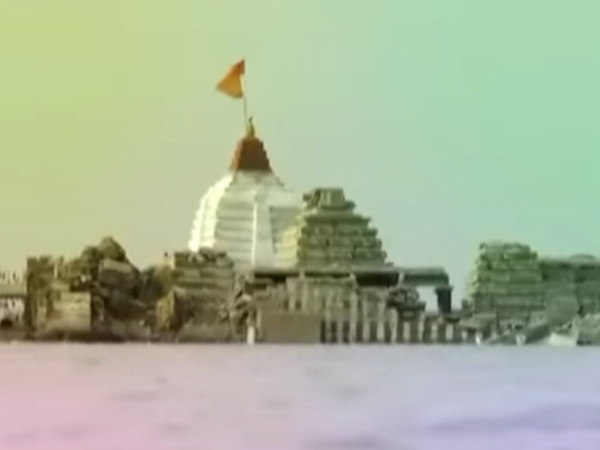 Shiva is one of the most interesting gods in the Hindu religion. If we observe, some Shiva temples are found in the unlikeliest of places across India. Even the famous Amarnath and Kedarnath Temples are not easily accessible. A sense of mystery revolving these Shiva Lingams strike a chord with our enthusiasm. Here is one such interesting shrine of Lord Shiva at the confluence of seven rivers! Yes, let us know about Sangameshwara Temple in Kurnool.

A distant view of Sangameshwara Temple

According to the myth, once the Pandavas of Mahabharata came to Kurnool during their exile. They decided to install a Shiva Linga in this region after visiting Srisailam Mallikarjuna Temple. So, Dharmaraya (Yudhishtira) told his brother Bhima to bring a Shiva Linga from Kashi. Later, they consecrated the Linga at the confluence of the river Krishna and Tungabhadra along with other five tributaries. Hence, the Linga was named as Sangameshwara (Sangama, where the rivers meet).

Now the temple is visible for some days when the water levels are low in summer. The temple is also opened to public during these days. Since 2003, the temple has constantly resurfaced every year in the summer months. However, this age-old architecture is under threat because of the water.

The temple remains open for 40 - 50 days and devotees are allowed to visit. People are taken in boats as the temple is surrounded by water. Several poojas and rituals are also performed for the wooden Lingam inside the sanctum.

Sangameshwara Temple is near the shore of Muchumarri Village in Kurnool District. It is built at a place where River Krishna and River Tungabhadra along with the tributaries named Bhavanasi, Veni, Bheemarathi and Malapaharani meet.

Srisailam Dam and Reservoir constructed at the border of Mahabubnagar and Kurnool district is one of the beautiful tourist attractions near Sangameshwara Temple.

How to Reach Sangameshwara Temple?

Sangameshwara Temple is open only for 40 - 50 days during April-May. Boats are available from the shore to visit this temple.

By Bus: Government run buses are available to reach the Pagidyala.

You have to either stay in Vijayawada or Guntur because there on no stay options in Muchmarri village.

To Book Hotels in Vijayawada

Comments
Read more about: temples religious travel shiva temples kurnool srisailam andhra pradesh
Other articles published on Oct 21, 2016
We use cookies to ensure that we give you the best experience on our website. This includes cookies from third party social media websites and ad networks. Such third party cookies may track your use on Nativeplanet sites for better rendering. Our partners use cookies to ensure we show you advertising that is relevant to you. If you continue without changing your settings, we'll assume that you are happy to receive all cookies on Nativeplanet website. However, you can change your cookie settings at any time. Learn more
Change Settings Continue