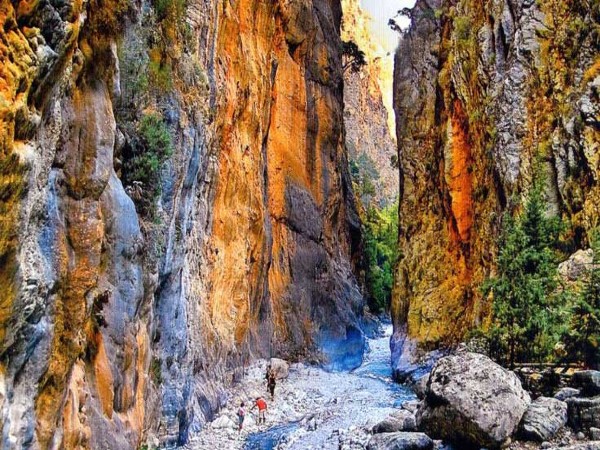 A deep ravine, sheer-sided in places, cuts a spectacular slice into towering sea cliffs and high mountains in western Crete. For 11 miles (18km) the Samaria Gorge twists and turns, widening and narrowing as it traces a serpentine course through the Levka Ori, or the White Mountains, whose sloped gleam white in the summer sun and are snow-covered in winter.

Cypresses, fig trees and oleanders spring from crevices and ledges in the gorge's walls. In places, fully grown cypress trees have rooted in the wallpaper-like limestone crust that has been deposited on the walls by water seeping down the mountainsides. High above, eagles and falcons soar and choughs circle in swarms, swirling like the black embers of a forest fire.

The gorge has been cut by the River Tarraios that flows along a fault between the Pachnes massif to the east and the Gingilos and Volakias mountains to the west. In winter the river is a fast-flowing torrent that races through the gorge, but in summer it dwindles to a bubbling stream.

For centuries the gorge was a refuge for bandits and outlaws, and for people trying to escape from the vendettas that existed between many of Crete's villages. In the 1940s it was an ideal hiding place for communist guerillas fighting in the Greek Civil War.

At the northern end of the gorge, nearly 4000ft (120m) above sea level, a steep wooden staircase descends into the ravine and takes the visitor through pine trees to the riverbed. About 5 miles (8km) into the gorge is the deserted village of Samaria, which was abandoned in 1962 when the gorge became part of a national park. Its Byzantine church of Osia Maria, which contain early frescoes, is thought to be the origin of the gorge's name.

Every turn of the path brings some new breathtaking vista, Giant boulders pile high one above the other, the river swirled over rocks and fills pools, and the incessant erosive force of water carves rocks into enchanting shapes.

Beyond Samaria, the gorge starts to narrow, and towering cliffs that rise sheer from the riverbed start to close in. In this deep and narrow corridor, the sky shrinks to a slender ribbon of blue, and the sun's rays penetrate for only a short while each day.

The gorge reaches its narrowest point at the Iron gates, which were described by an Englishman, Robert Pashley, who travelled through the gorge on a mule in the early 19th century. 'The width of this lofty chasm,' he wrote, 'is about ten feet at the ground and widens to about thirty or at the most forty feet at the top. The length of the way along which we have to pass in the middle of the rapid steam is about sixty paces. 'With walls at least 1600ft (500m) high, the Iron Gates can be an awesome place, especially when the wind howls through the narrow gap.