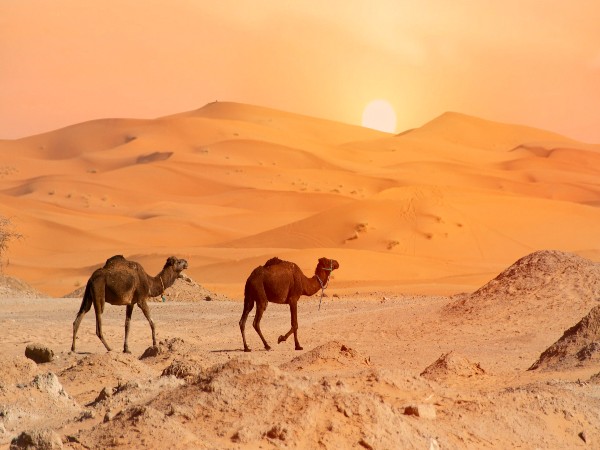 On Earth, the Sahara Desert, which is around 3.5 million square miles in size, is the most vast, driest, hot, and expansive desert (9,064,958 sq. km). It is situated in Northern Africa, tucked between the Red Sea in the east, the Atlantic Ocean in the west, and the Mediterranean Sea in the north. In between the desert and the African Savanna, to the south of the Sahara, is the Sahel region. The Sahara extends across a sizable portion of eleven distinct nations, including Egypt, Libya, Tunisia, Algeria, Morocco, Western Sahara, Mali, Niger, Mauritania, Chad, and Sudan.

The Sahara has a perpetually hot environment. It ranges from 38 to 46 degrees Celsius on average. The whole year is hot, dry, and windy. But nights can get very chilly, even freezing. Rainfall in the Sahara is quite rare. There may be almost no water in some Sahara regions. Because of this, it is challenging for life forms to exist.

Along with sand dunes, the Sahara's geography also features mountains, plateaus, dormant volcanoes, and depressions known as an oasis. The dunes can have many shapes, such as stars, crescents, or domes. In some areas of the desert, there are small patches of grassland. In the Sahara, the majority of the rivers and streams are periodic. However, the Nile River is an exception, flowing across the Sahara before emptying into the Mediterranean Sea.

Deserts did not always exist in the Sahara. The environment was left as parched and desolate as it is today after the last Ice Age. However, a rapid start of monsoon rains about 10,500 years ago changed the barren desert into a livable savannah. The animals and people living in the Nile River Valley were able to spread out into the savannah, as radiocarbon dating of human and animal remains has demonstrated to scientists. The subsequent several hundred years saw the rains persist, human settlements expand, and even the introduction of domesticated animals like sheep and goats.

Long before recorded history, people have inhabited parts of the Sahara that are today too dry for human habitation. According to archaeological discoveries, there used to be old Saharan lakes where people used to live, hunt, and fish. Even after these lakes vanished, humans used different means to live in the desert for hundreds of years. The rains started to stop some 7,300 years ago, and by 5,500 years ago, people had returned to the Nile River Valley.

Most epic facts about the Sahara Desert: