Sabarimala and the 18 Holy Steps 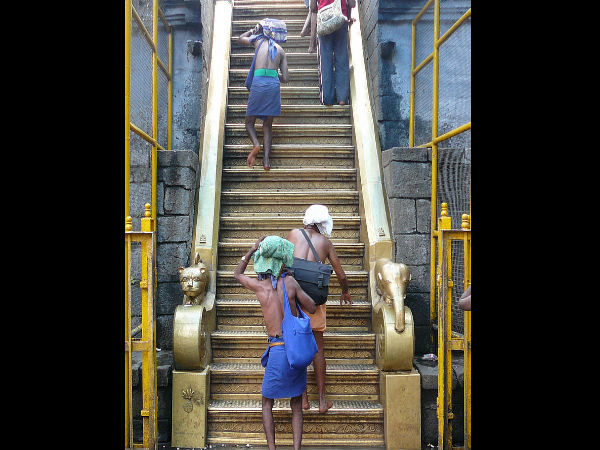 Sabarimala is one of the well known pilgrimage centres of India. Devotees from various parts of the world visit the Ayyappa Temple here to seek blessings. The temple is open for worship only during the Malayalam month of Vrishchika (Nov-Dec), Makar Sankranthi (January), Maha Vishwa Sankranti (April) and for the first two days of every Malayalam month. The temple is perched on the hill Sabarimala, which is located towards the east of Pathanamthitta district in Kerala.

Following the tradition, only those who observe vrata for 41 days and carry 'irumudi kettu' or the 'pallikkettu' (the bag carried by the devotee on his head) are allowed to step on the 18 holy steps. Each step here has its significance.

The first five steps of Sabarimala Temple symbolises the five human senses or the 'Panchendriyas'. The next eight steps denote the Ashtaragas which are Kama, Krodha, Lobha, Moha, Madha, Matsarya, Asooya and Dhumb, translated to Love, Anger, Greed, Lust, Pride, Unhealthy competition, Jealousy and Boastfulness. The next three steps stand for the Trigunas or the three nature-born qualities of Satva (simplicity), Rajas (enjoyment) and Thamas (lethargy). The last two steps portray Knowledge and Ignorance.

It is believed that once you climb the 18 steps that lead to the sanctum sanctorum, you are detached from all the worldly ties and are in a position with an open heart, which makes you close to the divine.

However, there are several other connotations to the relevance of the 18 holy steps. Lord Ayyappa was a master of 18 weapons. It is said that before he merged into the idol, he surrendered all his 18 weapons, one at each step. Another reasoning to these steps is that the temple is surrounded by 18 hills.

The number 18 also has its significance in Hindu mythology right from the Vedic Age. Each Veda has 18 chapters. The religious script Bhagavad Gita has 18 chapters, and the Kurukshetra war lasted for 18 days.

Another interesting ritual of the temple is that any devotee who completes climbing these 18 steps 18 times in his life, is to plant a coconut sapling at Sabarimala. Travel to this holy destination and feel the divine environs here that makes you want to visit it again. The elderly devotees are carried on bamboo chairs to the top, on being paid.

How to Reach Sabarimala