Rotorua: Most Sacred Maori Site In The World 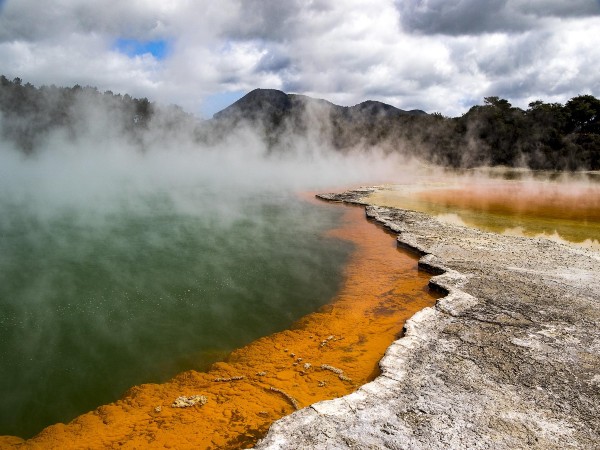 There are, in any case, many compensations. Since the Maori colonised what is now New Zealand in the 14th century, the Rotorua area has been the country of the great Arawa group of tribes. They, like the Europeans later, loved the mountain-grit chain of lakes centred on Lake Rotorua itself. The waters were full of Succulent fish, wildfowl of various kinds were plentiful and the ground was fertile and permanently warm. Most wonderful of all were the springs that provided water, not only hot enough for bathing but cooking, too. About them were geysers that periodically sent spouts of boiling water soaring high into the air.

The modern tourist resort of Rotorua, built by the lake shore, also depends upon these wonders but suffers that attendant disadvantage of standing amid the highly unstable Taupo Volcanic Zone which runs across much of the ground rumbles and steams threateningly, though the threats are seldom carried out. Instead, just beyond the resort's centre, at Whakarewarewa, they are such crowd pullers as Geyser Flat with its seven active geysers.

When underground water is heated by the underlying molten rock to pressurised steam, the geysers throw up columns of boiling water. Most spectacular is the Prince of Wales Feathers, a triple geyser that soars up to nearly 40ft (12m). This generally acts as a curtain-raiser for the 100ft (30m) Pohutu, suggesting that the two are linked underground. Nearby pools of boiling mud bubble, writhe and coalesce into ever-changing patterns.

About 15 miles (24km) to the southeast lies Waiotapu, whose Lady Knox Geyser has been encouraged to rise to great heights by the insertion of an iron pipe. A dose of soap flakes, administered daily, triggers a fountain of suds that shoots up to treetop level.

It emerges in wisps of steam from storm drains, cracks in the road, unusually deep, muddy hazards in the golf course, and even from flower beds in the garden. Rotoruans, tired of explaining that the reek is that of hydrogen sulphate, the very breath of volcanic activity, simply say that after a couple of days you won't notice it. And you don't.