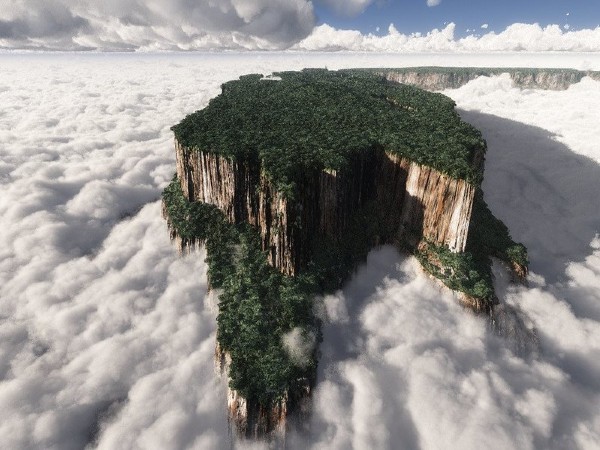 The Gran Sabana of Southeast Venezuela's Canaima National Park is a remote wilderness of Jungle, tropical savannah, rain and cloud forests, rivers and waterfalls. Over 1,500 million years, erosion studded the region with huge table mountains, once connected but now isolated into individual colossi whose sheer cliffs rise 1,000 m (3,280 ft) and much more. Roraima is the highest of these tepuis, and its 2,810-m (9,217-ft) summit is a geologist's and botanist's paradise.

With a microclimate, topography and endemic flora and fauna evolved in virtual isolation, it is a fantastic world of several rock formations fissures, gorges, pools, waterfalls and sandy 'beaches', valleys of sparkling multi-coloured crystals, insectivorous flowers in gaudy red and yellow, and flashing hummingbirds. Minerals in the rock turn stream into liquid rainbows of blue, red and green; and mist, fog, hot sunshine and driving rain make a lottery of the weather.

Getting there starts with a flight (by scheduled Cessna!) to Santa Elena, where you must buy all the food you will need, and then a 4*$ to the Pemon Indian village of Paraitepui, where you (or a tour agency) sort out the Park entrance fee, guides and porters. A full day's trek across rolling grassland, fording the Tek and Kukeran Rivers, brings you to the 1,800 m (5,900 ft) base of Roraima.

It takes a further 4 to 5-hour (minimum) diagonal climb up 'the ramp', through the cloud forest, waterfalls, and ancient rock formations to the top, where you camp in one of the sandy areas overhung by a rock called Valley of Crystals, but you'll need at least two days to explore any but the shorter ones. No matter, from the rim, you understand how Roraima's strange reality beggars imagination, and how it inspired Conan Doyle to believe in a 'Lost World'.

Year-round, but most people prefer the dry season between December and April. At any time, rain can cause rivers to swell, and delay even roped-up crossings.

Duration of the journey

1. Whatever you take up the tepui, you must take back down, including all forms of paper and other refuse.
2. Taking souvenirs - even a single stone or crystal - from the tepui is a serious offence; and your baggage is likely to be searched back in Paraitepui
3. Hooray! There are no mosquitoes on the plateau, but you will need a bug repellant for the vicious gnats (jejenes) of the Sabana.