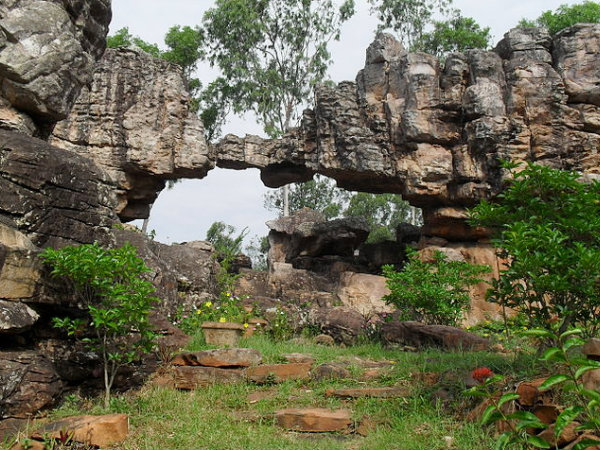 India is home to many attractions all thanks to its varied history. It has seen the rise and fall of many empires and the many cultures that once thrived here have left behind their mark which till date holds us in awe.

Of the many attractions that the country boasts of there are many which have naturally formed over time. Be it the magnificent mountains or the stunning waterfalls, India has it all.

One of the lesser know attrations here includes the various unique rock structures that can be seen across the country. These structures are sure to leave you spellbound as the defy all laws made by man and sure makes you appreciate the artistic skill of God.

Here is a guide to the nine unique rock structure that are to be found in India which every traveller should atleast visit once.

The Balancing Rocks in Jabalpur, Madhya Pradesh, is a sheer geological marvel in the true sense. Located on the way to the Madan Mahal Fort, it is a rocky formation of uneven rocks which is said to have been created by volcanic eruptions thousands of years ago. Balancing rocks can be seen from the top of the Madan Mahal Fort, along with a panoramic view of the whole city. A sheer delight for nature enthusiasts, a trip to Jabalpur is incomplete without visiting the famous Balancing Rocks.

St.Mary's Island in Karnataka, known more by the name Coconut Island is a small cluster of four islands located off Malpe sea coast in Udupi. The columnar basaltic lava formation is the most unique sight in the islands. Many tourists from far and wide come here to see these rock structures that stand in the sea. The island is one of the twenty-six declared Geological monuments in India.

Gilbert Hill is a 61 m monolith column of black basalt rock at Andheri, in Mumbai. The rock has a sheer vertical face and was formed when molten lava was squeezed out of the Earth's clefts during the Mesozoic Era about 66 million years ago. Gilbert Hill was declared a National Park in 1952 by the Government and in the year 2007 geologists have declared it a Grade II heritage structure. Atop the rock column are two Hindu temples, the Gaodevi and Durgamata temples which is set in a small garden and can be accessed by a steep staircase carved into the rock. The hill offers a panoramic view of suburban Mumbai.

Marble Rocks at Bhedaghat is by far the most visited tourist place in Jabalpur. It would not be wrong to say that over the years Jabalpur and Marble Rocks have become synonymous with each other. The marble rocks stand tall around 100 ft on both sides of the River Narmada. Tranquility is what one would expect on a visit to marble rocks at Bhedaghat. As the sparking sunlight falls on the white and off white coloured marble rocks, it casts a shadow on the river water making it a breathtaking scene. Bhedaghat and its Marble Rocks are at their best when the beaming moonlight falls on the rocks and the river simultaneously, and a boat ride is a lifetime experience to say the least.

The Natural Arch in Tirumala hills is a distinctive geological wonder. The arch measures 8 mt in width and 3 mt in height, and is naturally formed. The arch is one of the few natural arches or bridges in Asia.

Phantom Rock is located in the picturesque town of Wayanad in Kerala and is a must see for all the tourists visiting the place. The rock is structured naturally in the form of a skull and people of all ages will enjoy watching this peculiarly shaped rock. Local people refer to the rock as ‘Cheengeri Mala'. It is located in a place that is ideal for trekking and camping. However, you must carry your own gear and know the routes of the trails.

The Pillar Rocks is one of Kodaikanal's most popular tourist spots. The place gets its name because of the three granite boulders that stand vertically at this place. These pillars are 400 ft tall and offer a bird eye view of the beautiful landscape surrounding the area. The cleaves between the rocks are deep and dangerous and are called the Devil's Kitchen. The spot makes for a very picturesque view.

The Toad Rock at Mount Abu is a massive rock resembling the shape of a toad. The rock is near the Nakki Lake and on the trekking route. It is one of the major crowd pullers in this region.

Yana is a village located in forests of the Uttara Kannada district of Karnataka and is known for the unusual rock formation here. Located in the Sahyadri mountain range of the Western Ghats these two unique rock structures are a major tourist attraction and is easily approachable by a small trek. These two massive rock outcrops are known as the Bhairaveshwara Shikhara and the Mohini Shikhara and are composed of solid black, crystalline limestone. Bhairaveshwara Shikhara is 120 mt in height, while the Mohini Shikhara is 90 mt in height. Yana is also well known as a pilgrimage centre because of the cave temple below the Bhairaveshwara Shikhara where a Swayambhu Linga has been formed. Water drips from the roof over the linga, adding to the sanctity of the place.

Comments
Read more about: mount abu mumbai sirsi jabalpur unique travel ideas
Other articles published on Aug 5, 2015
We use cookies to ensure that we give you the best experience on our website. This includes cookies from third party social media websites and ad networks. Such third party cookies may track your use on Nativeplanet sites for better rendering. Our partners use cookies to ensure we show you advertising that is relevant to you. If you continue without changing your settings, we'll assume that you are happy to receive all cookies on Nativeplanet website. However, you can change your cookie settings at any time. Learn more
Change Settings Continue