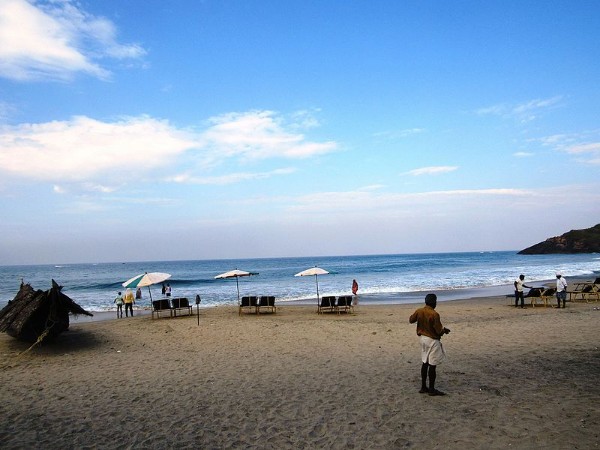 One of my friends is from the city of Thiruvananthapuram, someone who has a very close connection with the erstwhile royal family of Travancore.

This friend of mine always used to tempt us into visiting the city with all the stories associated with the famous Sree Padmanabha Swami Temple, the royal family and how the city functions.

Each time she returned home after holidays, she would get us these delicious Unniappams - a sweet dish that is really mouthwatering.

The distance from Bengaluru to Trivandrum is approximately 742 km and it would take 13.5 hours to reach the place. We boarded an overnight bus to Trivandrum and reached the city, early in the morning, the next day.

We reached Trivandrum at about 7:30 AM and our beloved friend was waiting for us at the bus station, along with her brother to receive us. We hopped into the car and headed straight to her home, where we were welcomed by her parents and her grandfather.

After the initial introductions, we headed to one of the rooms given to us by our gracious hosts to freshen up. The day we reached Trivandrum was Vijayadashmi, the last day of Navarathri, and it is common practice in most of the Hindu households to worship books on the last three days of Navarathri.

We finished having our bath and came to the pooja room to offer our prayers, after which we are made to write on rice, which is known as Vidyarambham. After this, without much delay, we headed straight to the dining area where we were served hot appams and stew.

After the filling breakfast, we decided to hire an auto and headed straight towards the Chala Market. The market has its own history to narrate. It was established in the end of 18th century by Raja Kesavadas, who was the Dewan of Travancore then.

The market is spread across a total area of 2 km and one would get anything in this market, starting from your daily groceries to clothes, jewellery, spices and even Ayurvedic medicines.

In one of the bylanes of the market is a well-known eatery called Rahmaniya, which serves a special chicken fry recipe called the Kethels chicken.

My friend told us that the owner of this eatery feeds his customers until his satisfaction, which means he serves the fried chicken until he decides to stop and in case you happen to say you are full, it is bad manners and he asks you to leave the place. Nobody says no to food here!

As we went through the market, we reached right in front of the Padmanabha Swami Temple and Padmathreetham, the temple pond. Our next stop was Kuthiramalika Palace, which is right next to the temple.

Before entering into the palace, my friend pointed out to us a huge clock atop the palace, the clock is known as Methamani, which is a historical landmark that was constructed in a complex pulley system.

The clock has a unique appearance, above the dial is the face of a bearded man with two rams on the sides of his cheeks. When the clock strikes, the rams hit the cheeks of the man.

"Methan" in Malayalam translates to a Muslim man and "Mani" means bell. the Muslim man on the clock is said to be Tipu Sultan, and it was set up in the 1840s after the Travancore Kings defeated Tipu. The clock still functions even now with the help of a software.

We entered into the palace, which is a museum now. "Kuthiramalika" in translation means the Mansion of Horses. The palace gets its name from the 122 horses, which are carved into the wooden wall brackets that support the roof.

The palace has 80 rooms, out of which only 20 are open for the visitors. The palace has a collection of various gifts that were presented to the Travancore royal family from various rulers across the globe. From Belgian chandeliers to various musical instruments, one can find a vast collection here.

Three artifact houses here caught our attention, one was a throne made out of 24 elephant tusks, the second was a throne made out of Bohemian crystals and the third was an illusion portrait of Chitira Thirunal Balarama Varma, which was painted by a Russian painter. The face and the shoes of the king appear facing the onlooker from every corner of the room.

We came out of the palace and walked towards Chitralaya next. It is a museum that houses various photographs of the royal family, which enables one to get a better understanding of the entire clan.

It started raining heavily due to which we decided to head back home after this and call it a day.

No visit to Trivandrum is complete without paying your respects to Sree Padmanabha Swami, hence we were up early, had a really quick breakfast and dressed in our traditional attire we headed straight to the famous Padmanabha Swami Temple.

To enter the temple, one needs to follow the dress code, which does not permit you to wear jeans or pants and men are not allowed to wear shirts or t-shirts inside the temple complex, while women are required to wear saree to enter into the temple.

We reached the temple, deposited our phones and shirts in the cloak room and later entered into the temple complex, which is under tight security after the authorities found out the immense amount of wealth that was kept hidden in the temple chambers.

We entered inside and got ourselves prepared to have the darshan of the Lord who can be seen lying in a meditative sleep on the five-headed snake called Ananthan. The darshan of the majestic Lord is possible only through the three doors, for which one has to ascend into a mandapam.

In the first door, we get to see his beautiful face and his right hand which is placed over a Shivalinga, in the second door, his torso and a lotus emanating from his navel on top of which we can see Brahma, and in the last door the Lord's feet.

After offering our prayers to the Lord, we quickly rushed back home, since we had an appointment with a very important person. The important person was none other than the princess of the erstwhile Travancore family.

My travel companion and I were all excited to meet the princess, and it was our first experience to get into a palace and meet a princess. The palace is known as Kowdiar, which is out of bounds for the general public.

We drived towards the entrance of the palace and we waited for the princess Aswathi Thirunal Gowri Lakshmi Bayi and as we waited for her, she walked in towards us and we bowed in front of her as a mark of respect.

The princess is a very humble and down-to-earth person, who spoke to us in detail about how she wrote her SSLC exam. She told us stories about the temple and about the royal family. The princess also happens to be a writer who has published various books.

We took her blessings and left the palace and headed back home with the gifts the princess gave us. Towards evening, we decided to head to the Shangumugham beach to catch the sunset.

After watching the beautiful sunset and clicking lots of pictures, we headed back home and called it a day.

On day 3, we decided to head towards Ponmudi, a hill station about 60 odd kilometres from the city. At an altitude of 1110 metres above sea level, it is part of the Western Ghats and runs parallel to the Arabian sea.

Ponmudi is like heaven on earth, a short trek took us to a small peak and we decided to sit there and adore the beauty of mother nature. The cool breeze that blows onto ones face is an experience that cannot be described in words.

After this, we decided to come down and have our lunch at the government-run guest house, which has a very limited number of meals cooked in a day. After the stomach-filling meals and an ice cream, we headed back home.

After reaching back home, we freshened up and headed towards another famous temple dedicated to Lord Ganesha called Pazhavangadi Ganapathi Temple.

The breaking of coconuts is considered as an important offering here, hence the three of us bought coconuts from a nearby seller and offered them by breaking them before the Lord and sought for his blessings.

We headed to Nirvana for dinner, which offers you some delicious Chinese food. The atmosphere here is something very laidback and a place to just relax and unwind.

A graffiti on the outside wall of the cafe grabbed our attention, it had a map of the entire Trivandrum painted on it and we had a quick quiz guessing of the places too.

It was our last day in the city before we headed back to Bengaluru that night. We headed towards the Kovalam beach and another one called Azhimala beach.

Kovalam Beach does not require much to be said, our first stop in Kovalam was The Leela Kovalam Beach, it was not for the luxury but it had something very unusual. There is a giant chess board in its garden.

The Leela was a palace of the Travancore Royals before The Leela group acquired it. This giant chess board did not have pawns to play instead people were made to stand in the place of the pawns.

The Large Chess Board

It's something very unusual to see. One can imagine how the Royals enjoyed their time at this particular palace. We could not grab many sights at the beach, as the rain played havoc.

Since it looked like it was not going to stop raining, we decided to head towards the Azhimala beach, a little away from Kovalam. Thankfully, the rain gods showed us some mercy and we started our walk towards the beach.

This beach is very quiet and not filled with tourists like in Kovalam, which is a perfect place for one to relax. The beach is below a cliff and we decided not to get down the cliff, as it was very slippery due to the rains.

Also Read : Best Things To Do At Kovalam

However, the view from the cliff itself was very satisfying and that is exactly when it striked to us that we have a bus to catch to Bengaluru.

With a heavy heart, we bid adieu to the wonderful family who took care of us, and to the city which we promised to return soon. We headed back to Bengaluru with a lot of memories filled in our bags along with the yummy Unniappams.

Comments
Read more about: bangalore thiruvananthapuram road trip travel india
Other articles published on Mar 7, 2017
We use cookies to ensure that we give you the best experience on our website. This includes cookies from third party social media websites and ad networks. Such third party cookies may track your use on Nativeplanet sites for better rendering. Our partners use cookies to ensure we show you advertising that is relevant to you. If you continue without changing your settings, we'll assume that you are happy to receive all cookies on Nativeplanet website. However, you can change your cookie settings at any time. Learn more
Change Settings Continue