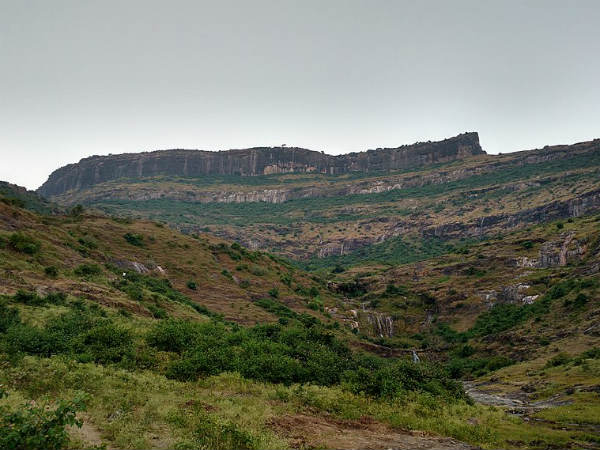 The spiritual capital of Maharashtra, Nashik is a significant tourist destination in India. Every year, it is frequented by thousands of travellers from all over the country. From ancient temples to historical forts, appealing waterfalls to lush green hills and rich dense forests to beautiful vineyards, you can find everything within its boundaries. Hence, over a period of time, it has become one of the most-visited tourist spots in Maharashtra. But do you know there are still hundreds of attractions which are only known amongst locals and are far away from the eyes of common tourists? One such attraction is the ancient Rajdher Fort, which is located atop a hill and is known for weekend trekking and photography. If you would love to explore this hidden beauty, then read on!

As the region in and around Rajdher Fort experiences an extreme type of climate during the summer season, it is not a preferred spot for tourists during the summers. The best time when the beauty of the natural surroundings of the fort is at its peak and when one can comfortably explore its history is from October until the end of February. It is also a weekend destination during the monsoon season. However, you need to be very careful of slippery tracks which become risky during this season.

The History And Surroundings Of Rajdher Fort

Located at a distance of about 10 km from the town of Chandwad in the Nashik district of Maharashtra, Rajdher Fort is a hill fort which was established several centuries ago in the Medieval Period of India.

However, it has also been ruled by several dynasties in the past, including the Nizams and the Peshwas. It was also under the control of the British army after it was captured by them in the year 1818. With an elevation of about 4,400 ft, Rajdher Fort is built of stone and is currently lying in ruins.

However, you can still find water cisterns and inscriptions in their intact form. Over a period of time, Rajdher Fort has a become a weekend destination for trekkers. Every year, it is visited by hundreds of locals and offbeat travellers.

Why You Must Visit Rajdher Fort

If you are looking for a destination where you can enjoy nature as well as history, then you must plan a tour of Rajdher Fort. As the region is blessed with lush greenery, it is also a perfect place for nature photography. So, it wouldn't be wrong to say that Rajdher Fort is a weekend stoppage for every kind of traveller.

How To Reach Rajdher Fort

By Air: The nearest airport to Rajdher Fort is located in Nashik at an approximate distance of 58 km. Once you have reached Nashik, you can either take a direct cab or use public transport to reach the base village, Rajdherwadi, from where you need to trek up the hill to reach the fort.

By Road: The base of the fort is easily approachable by road. It takes an average time of 2 h to reach the top of the fort from Rajdherwadi.

Comments
Read more about: india travel tourism nashik maharashtra forts history nature weekend hills
Other articles published on Oct 30, 2018
We use cookies to ensure that we give you the best experience on our website. This includes cookies from third party social media websites and ad networks. Such third party cookies may track your use on Nativeplanet sites for better rendering. Our partners use cookies to ensure we show you advertising that is relevant to you. If you continue without changing your settings, we'll assume that you are happy to receive all cookies on Nativeplanet website. However, you can change your cookie settings at any time. Learn more
Change Settings Continue