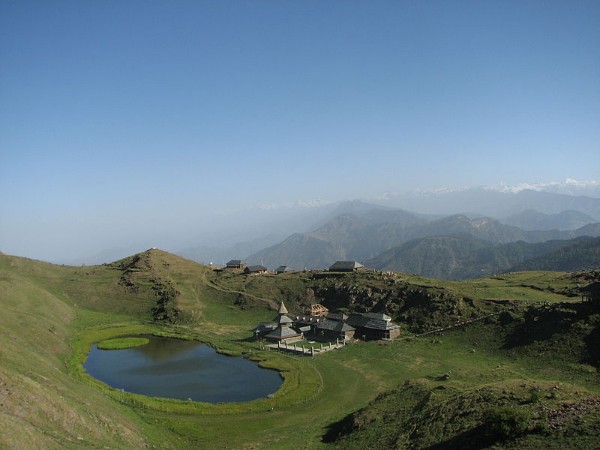 Prashar lake lies 49 km north of Mandi in Himachal Pradesh. At an elevation of 2730 metre above sea level, the lake has a 13th century pagoda temple adjacent to it. The striking river of Beas and the majestic ranges of Dhauladhar, Kinnaur and Pir Panjal creates a fairyland landscape here.

Duration of the trek : 2 Days

Trekking Trail : Base camp is at Baggi. The 7.5 km trail takes you through beautiful meadows and dense forests!

Best time for Prashar lake trek : Any time of the year except monsoon. During the winter season, from December - mid March, the frozen lake and snowy landscape vouches for a perfect winter trek!

The ancient pagoda temple, built in 13th century A.D. mesmerises one and all with its spectacular backdrop! This three storied pagoda temple is dedicated to Sage Prashar and has intricate wood carving designs. Legend has it, that it was built by a baby from a single tree!

The surreal landscape of Prashar lake is certainly one of the best trekking destinations in Himachal Pradesh. Take this enchanting trek to get enviably closer to Mother Nature! Happy Travelling :)

Did you know?! The picturesque lake has a floating island in it and the depth of it is unclear, with a diver not being able to determine its depth!

Comments
Read more about: travel nature himachal pradesh lakes mandi trekking trek
Other articles published on Jan 3, 2017
We use cookies to ensure that we give you the best experience on our website. This includes cookies from third party social media websites and ad networks. Such third party cookies may track your use on Nativeplanet sites for better rendering. Our partners use cookies to ensure we show you advertising that is relevant to you. If you continue without changing your settings, we'll assume that you are happy to receive all cookies on Nativeplanet website. However, you can change your cookie settings at any time. Learn more
Change Settings Continue