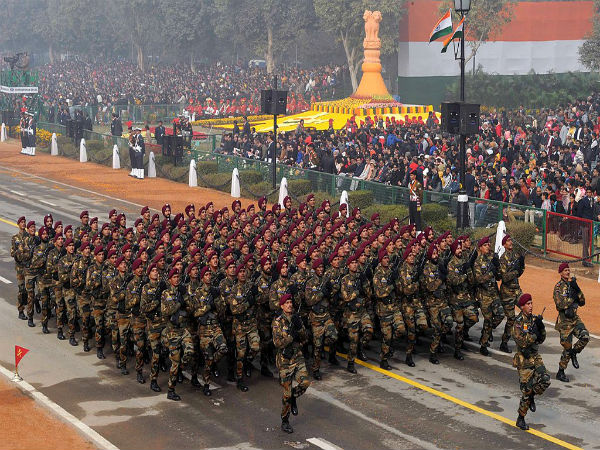 Glorious, dynamic and royal is how Indian history can be described! Not only in the workforce and financial terms but India is also rich in terms of history, folklore, culture, heritage sites, landmark and natural bounties. Here is the list of popular Indian landmarks to visit on this republic day, which played a central role in the Indian liberation movement and without which the tale of India's rise to democracy is incomplete!

Secluded from the mainland, Cellular Jail aka Kala Pani in Andaman & Nicobar Islands has observed the appalling punishments inflicted on political prisoners. Built by the British Raj in India during their colonial stranglehold, this most dreaded prison was primarily used by the British to exile Indian political prisoners. Today, this archaic colonial prison is a National Memorial, and it is open to public viewing. One can get a glimpse of years of India's struggle for freedom. Also an acting museum, Cellular Jail displays the memories of martyrs in the galleries.

Erected during the reign of Nawab Saadat Ali Khan, the British Residency aka Lucknow Residency is a popular historical landmark in India. Though now in ruins, it has been declared as a preserved memorial by the Archaeological Survey of India. The Lucknow Residency was the site that acted as a shelter for nearly 3000 British colonists during the time of the first independence war in 1857. Now an acting government office, this British Residency of India is well-maintained by the authorities and a must-visit landmark this Republic day.

The most tragic and infamous incident that took place on 13 April, 1919 in Jallianwala Bagh, Amritsar - lit up the fire in Indian hearts, leading to our independence movement. There were 900 people dead and around 1400 causality. Even do this day, one can notice the bullet marks on the walls and the adjoining buildings. Today, Jallianwala Bagh is a public garden and a memorial, that can be visited round the year to pay homage to the victims.

Built-in the 17th century by the 5th Mughal ruler Shahjahan,

Red fort is one of the quintessential monuments that played a pivotal role during the freedom struggle in India. It is encircled by a rubble stone wall, with gates and bastions at intervals. It is here, the first tricolour of Independence was hosted, by the first Prime Minister, Pandit Jawaharlal Nehru. Which consequently led to Indian liberation and rise as a democratic nation!

After returning from South Africa, Gandhi found the Ashram in Sabarmati, which was a living example of his beliefs and ideologies. Also known as Harijan Ashram, Sabarmati Ashram was home to Mohandas Gandhi for 13 years (1917 - 1930) and served as one of the chief centres of the Indian independence struggle. Formerly called the Satyagraha Ashram, echoing the movement of submissive resistance launched by the Mahatma, the Ashram became abode to the philosophy that set India free. Titled after the river, Sabarmati Ashram was established with a dual mission. To assist as an organisation that would carry on a quest for truth and a floor to bring together a group of workers committed to non-violence who would help achieve freedom for India.

Netaji Bhawan has immense historical importance as this house was a centre of political activities for freedom fighters. Netaji Bhawan was constructed in 1909 by Janakinath Bose, father of Netaji Subhas Chandra Bose. Ever since the death of Jawaharlal Nehru, the ancestral home is protected and maintained by the Netaji Research Bureau. Moreover, the Netaji Research Bureau converted this popular landmark into a museum in 1961 with wonderfully organised biographical galleries, devoted to the life of Netaji.

The Aga Khan Palace was constructed in1892 by the Sultan Mohammed Shah Aga Khan III, on the banks of River Mula; during the early 20th century this monument played a pivotal role during the freedom struggle. Gandhiji, his wife Kasturba, and Mahadevbhai Desai were taken refuge at the palace from 9 August 1942 to 6 May 1944, following the Quit India Movement in 1942. However, tragically, Kasturba and Mahadevbhai passed away while in confinement at this palace, and their burial grounds are located in its vicinity. Today, the palace is a famous memorial to Gandhi and his life.

Comments
Read more about: republic day india
Other articles published on Jan 24, 2020
We use cookies to ensure that we give you the best experience on our website. This includes cookies from third party social media websites and ad networks. Such third party cookies may track your use on Nativeplanet sites for better rendering. Our partners use cookies to ensure we show you advertising that is relevant to you. If you continue without changing your settings, we'll assume that you are happy to receive all cookies on Nativeplanet website. However, you can change your cookie settings at any time. Learn more
Change Settings Continue