Subhas Chandra Bose Statue At India Gate: All You Need To Know 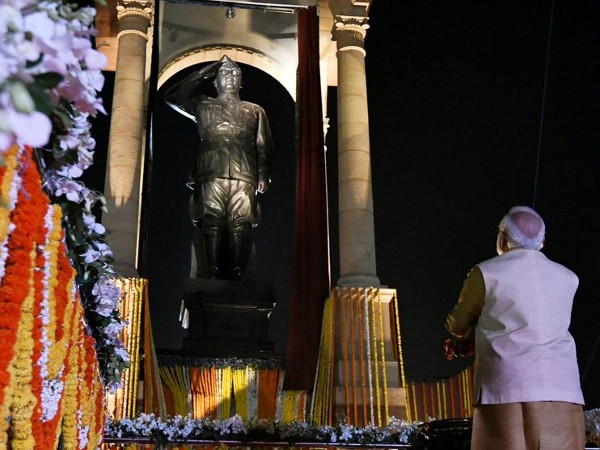 Prime minister Narendra Modi Unveils the extraordinary Subhas Chandra Bose Statue at India Gate on 08th September 2022 which is standing under the grand canopy located on the east side of India gate or the east-west axis of the National War Memorial. The canopy once had the sculpture of Ruler George V put in it before 1968.

Made up of black granite, the statue is a tribute to the great Indian leader and freedom fighter Subhas Chandra Bose, who is also called Netaji Subhas Chandra Bose. The statue was designed by a team under the National Gallery of Modern Art (NGMA) and was headed by Adwaita Gadanayak, Director-General with other members of a culture ministry committee.

The statue of Netaji Subhas Chandra Bose is carved out of a gigantic monolithic block of granite weighing 280 tonnes, which was brought from Khammam in Telangana. It took huge efforts to bring the block to New Delhi as a special 100-foot truck having 140 wheels was designed to bring it to Delhi covering a distance of 1,665 km from Telangana to New Delhi. As per reports, the statue carved is entirely hand hand-sculpted with a combination of traditional techniques and modern tools.

The height of this historic statue of Netaji Subhas Chandra Bose is 28 feet and it weighs 65 tonnes or 65,000 kg. It required great hard work of 20 to 25 sculptors and 26,000-man hours to complete this historic statue. Arun Yogiraj, a Mysore-based sculptor led the team of sculptors to create this extraordinary statue. Arun Yogiraj is also known for his past works including the 12-feet amazing statue of Vedic scholar, Adi Shankaracharya at Kedarnath, Uttarakhand, 14.5-feet white marble sculpture of Jayachamarajendra Wadiyar, who was the maharaja of Mysore and also a great white marble statue of Swami Ramakrishna Paramahamsa.

To mark the birth anniversary of the great Indian leader, Subhas Chandra Bose on 23rd January, Prime minister Narendra Modi Unveiled the hologram of the same dimensions in which the final statue is presented after completion.

Rail: New Delhi railway stations are well connected with all major cities in the country.

Road: City buses, cabs, or taxis are easily available throughout Delhi to reach up to Subhas Chandra Bose Statue at India Gate.

Metro: Central Secretariat will be the closest metro station to India gate having a distance of just 2.3 Km.