Places Where You Can Spot Living Root Bridges In India 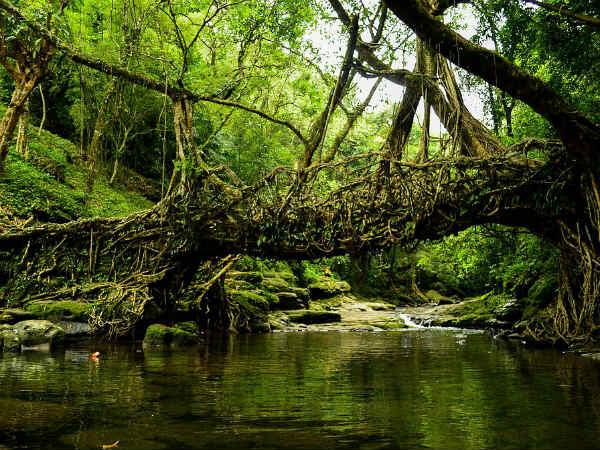 Have you ever seen such striking beauties? Well, if not, then you have come to the right spot. Here, we discuss major places in India where you can spot living root bridges. Read on to know more about them.

If there is any place which has become a synonym to living root bridges over a period of time, then it is certainly Nongriat in Meghalaya. Located at a distance of about 65 km from the capital city, Shillong, Nongriat is a small yet photogenic place in the district of East Khasi Hills and is immensely popular for its double-decker living root bridges, which is one of its kind in the world.

Such is its popularity that it has been featured on certain international programs and TV series. The living root bridge of Nongriat is known as Jingkieng locally and is said to be 100 years old. The bridge was weaved by the hands of the local Khasi tribe.

You can also visit the nearby hybrid root bridge which is made out of living roots and steel wires. Doesn't Nongriat seem like a wonderland? If yes, then pack your bags and be on the road leading to this natural wonder.

So, if you are looking forward to exploring something new away from the tourist crowd, then you must take a stroll amid the beautiful expanse of Laitkynsew. You can also relish the grandeur of the nearby Ka Likai Waterfall.

You can spot such bridges in numerous villages of Nagaland, such as Nyahnyu. However, most of them are still unknown to common tourists. Well, did you ever think of Nagaland as a place harbouring the beauty of these natural wonders? Certainly not.

The living root bridges of Nagaland are shorter and thinner in comparison to those in Meghalaya; however, they still need to be explored. After all, it is not easy to find such beauties everywhere in India. So, what do you think of a visit to the land of Nagas now?