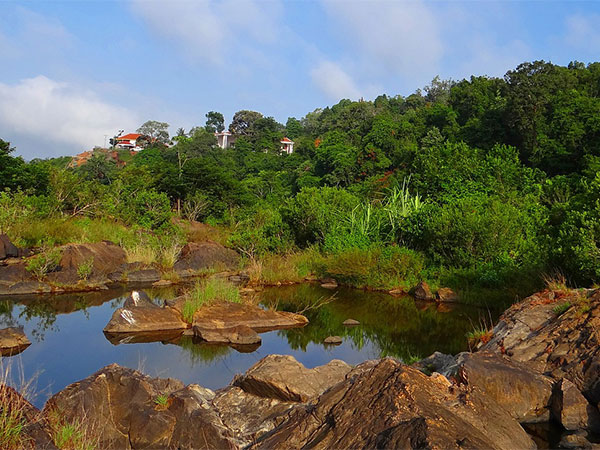 Celebrated for its rich cultural heritage, the state of Madhya Pradesh owes its history to the reign of different dynasties over a long stretch of time. Katni, usually, does not make an obvious choice for a break in Madhya Pradesh, but this little town is a medley of rich history and majestic monuments, which happen to be the relics from Mahakausal, Bundelkhand, and Baghelkhand. With one of the largest rail junctions in the country, located on the banks of the river Katni, the town is a rich reserve of cultural heritage.

The town of Katni has an interesting history behind its name. History has it that the place acquired this name as the village of Katni was rewarded to brave people who used to behead others. A similar story comes from the era of the British Raj; it is said that Katni is a place where they used to cut heads of rebellions and plunderers and hung them in squares to frighten people, very much alike the Game of Thrones way.

A visit to Katni will not just be a great place to soak in all the culture and learn about the history of Madhya Pradesh but also its historical sites and monuments will help you get an unforgettable experience of a place that preserves nature and culture in its truest form. Soak in the town's culture and history with its laurels aplenty. Don't miss out on these incredible places and explore the less explored.

Places To Explore In Katni

Vijayraghavgarh fort, a historical marvel, is a one-hour drive away from Katni. The fort has a temple of Lord Vijayraghav and is one of the oldest and most beautiful forts in the state. Built in the early 1820s, the fort made from lime and sandstone, stands as a proud remnant of history. But this historical fort has gone through a few changes over the years.

The Revolt of 1857 marred the charm of this architectural marvel, but its crumbling fort walls, bathed in rich history and culture sure never fail to catch your attention. There are also places like Antah Puram, Gupt Dwar, Samadhi Sthal, Rang Mahal, Sita Temple in Vijayraghavgarh, that are worth a visit.

Katni has temples by the dozen. The Bahoriband, with its 12-feet high Jain Tirthankara Shantinath sculpture is of remarkable religious significance and is popular among travellers. The statue has inscriptions about the rulers from former times. The place also boasts some other important statues of the Lord Sun and Lord Narayan Shaishayani. Bahoriband is home to such stunning statues and sculptures, and the stone with the paintings of all the 10 avatars of Lord Vishnu sure shrouds the place in mystery and wonder.

The sacred temple of Roopnath makes for one of the most spiritual sites and a revered pilgrimage for the Katni locals and devotees all over the world. With gorgeous architecture and mythological figures adorning the temple walls, the one-of-a-kind five lingam or Panchlinga statue of Lord Shiva is the centerpiece of the place.

Another crowd puller of the Roopnath pilgrimage are the three kunds or ponds that are situated one above the other. The kund that lies on the top is the Ram kund, while the middle one is Lakshman Kund and the lowest one is the Sita Kund. Myths have it that the mythological figures of Ram, Sita and Laxman stayed here during their years of exile.

Katni is frequently touted as a historical town with centuries-old monuments and scriptures. But with its rich history and archaic monuments, there stands Jagriti Park, an urban park, amidst all the history and heritage. With beautifully crafted plantations and pavements, the park also has a duck train and a science park to catch your fancy. With refreshments and eatables available in the park, the place makes for a great recreation park to hang out at and spend some quality time with your friends and family.

Katni, the archaeological complex, is lined up with historical marvels and wonders. Bilhary is one such gem of this town. It is difficult to leave the temples of Bilhary behind, when talking about the historical and mythical significance of the place. Bilhari, formerly known as Pushpavati, with its years of cultural heritage and age-old scriptures and monuments, makes for a pretty sight. Experience divinity everywhere in the temples of Bilhary with gorgeous temples dedicated to the Hindu deities of Lord Vishnu and Lord Shiva (Fort of Kamakandla).

How To Reach Katni

By Air: The closest airport to Katni is located at Jabalpur, which is at a distance of about 100 km from the town.

By Rail: Katni has a railway station, which is termed as one of the largest and busiest railway junctions of the country. So the best and the most favourable way to reach this town would be by train. The town has good and easy connectivity and is pretty accessible from parts all over the country by the railroads.

By Road: Katni is connected via roadways to Varanasi, Nagpur, Bhopal, Raipur, Allahabad, Hyderabad and Bangalore. The longest national highway of India National Highway 7 runs through the town.

Best Time To Visit: The winter months make the most favourable time to visit this town. In the months of and between October to March, the weather remains pleasant and the town comes alive with the seasonal festivities of Dusshera.

Comments
Read more about: madhya pradesh pilgrimage heritage travel
Other articles published on Dec 18, 2018
We use cookies to ensure that we give you the best experience on our website. This includes cookies from third party social media websites and ad networks. Such third party cookies may track your use on Nativeplanet sites for better rendering. Our partners use cookies to ensure we show you advertising that is relevant to you. If you continue without changing your settings, we'll assume that you are happy to receive all cookies on Nativeplanet website. However, you can change your cookie settings at any time. Learn more
Change Settings Continue