The City of Monuments, Bhuj 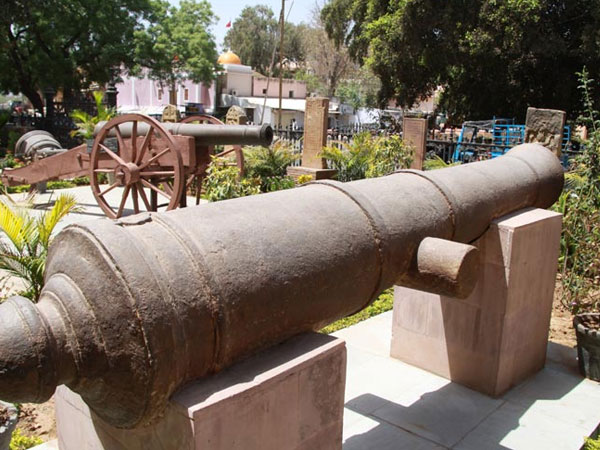 Some of the tourist places of attraction in Bhuj include Bharatiya Sanskriti Darshan, Sharad Baug Palace, Black Hill, Hamirsar Lake, Prag Mahal and many more.

One of the places to visit in Bhuj is the Aina Mahal which is also known as 'Hall of Mirrors'. Built in the mid-18th century by Ram Singh Malam, this building houses some very beautiful art pieces and paintings. Tourists can come here and browse through the various artifacts kept here.

The Bharatiya Sanskriti Darshan is a major tourist attraction in Bhuj where you can see the wide ranges of folk art and crafts being showcased. It is open on all days for the public except on Monday. Tourists coming here get to learn more about the traditions and culture of the people who live here.

Bhujodi is an art lovers paradise where tourists get to interact with artisans, weavers and block printers. You can see these people at work and if they are up for it then you might as well give it a try. It is one of the most recreational places in Bhuj.

Another place to visit in Bhuj is the Sharad Baug Palace which used to be the Royal Residence of the King of Kutch. It is now a museum where you can see beautiful artifacts and other items on display. Tourists coming here get an insight into the life of the kings. Also this place boasts of a beautiful garden having many varieties of flowers and medicinal plants. It is open to the public six day in week with Friday being an off.

Another tourist attraction in Bhuj are the serene and mysterious Black Hill which is locally called 'Kalo Dungar'. It is the highest point in this region and provides a panoramic view of the Rann of Kutch which lies beyond it. There is an ancient temple here dedicated to Lord Dattareya which attracts both tourists and devotees alike.

Dhamadka is another tourist attraction in Bhuj which is famous for its block printing technique. Tourists come here to learn more about this technique and also see the artisans at work. It is one of the few places where these age old technique is still followed and hence in terms can be said a conserved region.

A place to visit in Bhuj is the town of Kera which is known for its historical monuments. There is a temple dedicated to Lord Shiva here built by the Solanki kings and also the Kapilkot Fort. In the earthquake of 1819 these structure were nearly destroyed and what remains of them can be seen by the tourists.

The Hamirsar Lake is a man-made lake that lies in the center of Bhuj and is named after Rao Hamir, the ruler of Jadeja. There is a colorful garden at the center of this lake which attracts lots of tourists here. It is a major picnic spot and also a good place to relax and take in the coll breeze that comes in.

The Kutch Museum is must visit place in Bhuj as it houses many paintings, coins, musical instruments, sculptures, ancient scripts and many more. It is one of the oldest museums in Gujarat and is loaded with lots of history. Tourists coming here can browse through the displays and learn more gain information about these artifacts. It is one of the most educative places in Bhuj and is major attraction here.

The Prag Mahal is a major tourist attraction in Bhuj which is known for its beautiful Italian-Gothic style of architecture. Tourists come here to marvel this amazing palace and explore it. Although now in a despairing shape this palace shot to fame with a couple of Bollywood movies being shot here namely 'Hum Dil De Chuke Sanam' and 'Lagaan'. The earthquake in 2001 and a massive burglary in 2006 has left this otherwise majestic building in a sorry state. It is still open for the public with the security of this place having been tightened.

Another place to visit in Bhuj is the Ramkund Step-well which is famous for the beautiful images of the characters in Ramayana and the ten incarnations of Lord Vishnu etched onto the wall here. Tourists come from far and wide to see this masterpiece and also be awe-struck by its beauty. You can take the steps down to the well and sit down and enjoy the scenic architecture of this building.

The Swaminarayan Temple is known for its beautiful environment. There are many colorful wooden sculptures of Lord Krishna and Radha here. It is a religious place which is flocked by devotees who come to pay their respect. Tourist coming here can explore this scenic landscape and also relax here.

Another tourist attraction in Bhuj are the Royal Chhatardis which are the memorials for the royal family of Bhuj. Each and every single monument here is attractive and is bound to leave the visitors speechless. Even though a few of them were destroyed in the 2001 earthquake these still hold the grandeur of the past. Tourists can explore these beautiful monuments and be amazed by the artistic skill of the artisans.

By Air: Bhuj Airport, recently named as Shyamji Krishna Verma Airport is at a distance of 7 kms from the city center. It is well connected with the major cities of the country.

By Train: Bhuj Express and Kutch Express are two trains that ply between Bhuj and Ahmedabad daily. Ahmedabad Railway Station is well connected with all the other cities in India.

By Road: Bhuj can be reached easily and comfortably by buses from both the state transport as well as private companies. You can also avail jeeps or hire cars to reach here.

Comments
Read more about: bhuj gujarat travel nature
Other articles published on Aug 16, 2014
We use cookies to ensure that we give you the best experience on our website. This includes cookies from third party social media websites and ad networks. Such third party cookies may track your use on Nativeplanet sites for better rendering. Our partners use cookies to ensure we show you advertising that is relevant to you. If you continue without changing your settings, we'll assume that you are happy to receive all cookies on Nativeplanet website. However, you can change your cookie settings at any time. Learn more
Change Settings Continue