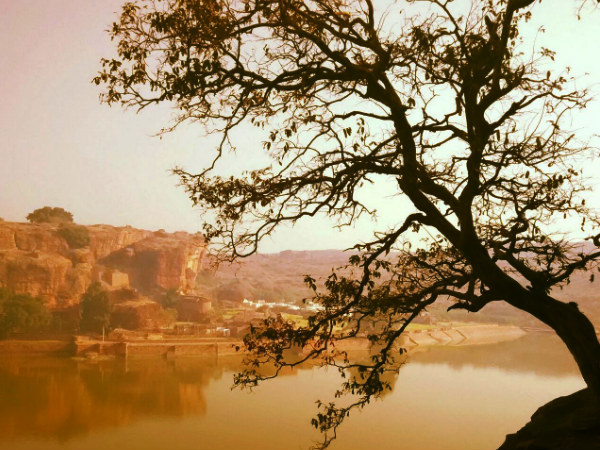 Have you ever came out of a railway station and found a bunch of monkeys in the platform right by you acting as if they are travel guides welcoming you to a new place?

Welcome to Badami, a small village in Bagalkot district of Karnataka where history, mythology and perfect bliss co exists.

Being a bachelor, working in Bangalore, it was quite easy for me to plan a quick trip to the great Chalukyan Odyssey at Badami and the neighbouring Pattadakal, located on the left bank of the Malaprabha River.

Beautiful View of the river.

I walked out of the railway station and picked a share Auto-rickshaw that took me to Badami town for Rs.10. The mammoth Badami caves stood tall and were visible right from the place I was standing. It was just a five minutes walk that took me to the Chalukyan wonder carved out of stone.

The main cave had four temples in it, three of them were Hindu temples while one was a Jain temple. Each and every corner was etched to perfection by the amazing artists who created these wonders.

I was absolutely blown away on seeing the perfectly carved 18 armed Nataraja that featured 81 mudras of Bharatanatyam dance in a single carving. If you match any left hand and any right hand in the carving, you will have a proper Bharatnatyam pose.

The architects of this wonder took 38 years for the completion of the first cave which is a Shiva temple. The next two caves are also temples that are dedicated to Lord Vishnu and the last one is a Jain temple.

The stone pillars of the temple.

There is a fort like structure at the top the caves, tourists are advised not to go in there as that place is considered haunted.

Admire the architectural beauty of the temples.

After spending some time taking in the beauty of the architecture of these ancient wonders, I hired an Auto-rickshaw to go to Pattadakkal which is around 30 km from Badami. The road had a lot of sunflower fields on both sides and It gave such an exotic feeling. I asked the auto-rickshaw driver to stop near a sunflower field so that I could enjoy walking amongst nature's beauty.

View of the Sunfower field.

It was soothing and revitalizing and I never thought that Northern Karnataka was blessed with such beautiful locations. A place like this was a bonus for a traveller like me who while setting out on this journey only expected to come across history and heritage.

Finally after having travelled for some time on the bumpy roads I reached Pattadakkal. It is the 2nd UNESCO World Heritage site in Karnataka and gets it name from being the site where Princes would be crowned as King, a ritual known as Pattabhisheka. Around 70 princes were crowned as king at this place.

I explored the entire region taking in all its historical past and admiring the importance of this place which now is nearly forgotten by many. After having spend nearly 2 hours in this royal place I started to head back to the station as it was time to catch the train. I was again greeted outside the station by a group of wild monkeys and I silently bid them goodbye.

Monkeys outside the railway station.

Though it was a short trip, there was much to see and learn from it. Even today I find myself at times day dreaming about that trip and secretly hoping that one day I can again go back there and relive those wonderful moments.

Arjun Radhakrishnan is an avid photographer and traveller who loves to explore new places and capture the beauty of these places. He presently works as a Mechanical Engineer in Bangalore and is always looking forward to his next escapade!

Comments
Read more about: badami karnataka
Other articles published on Mar 21, 2015
We use cookies to ensure that we give you the best experience on our website. This includes cookies from third party social media websites and ad networks. Such third party cookies may track your use on Nativeplanet sites for better rendering. Our partners use cookies to ensure we show you advertising that is relevant to you. If you continue without changing your settings, we'll assume that you are happy to receive all cookies on Nativeplanet website. However, you can change your cookie settings at any time. Learn more
Change Settings Continue