Nativeplanet
»
Travel guide
»Pack Your Bags And Head To Abohar: We Give You Reasons Why

Pack Your Bags And Head To Abohar: We Give You Reasons Why 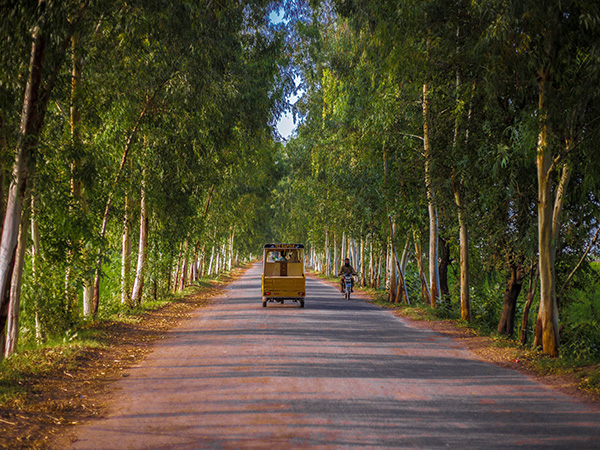 A mellifluous symphony of three distinct Indian cultures of the states of Punjab, Haryana and Rajasthan come together in this little town of Abohar, Punjab. With scanty population and abundance of natural grandeur, the town is a quaint little place of both historical and natural significance. Founded in the 12th century, the town lies close to the Indo-Pakistan border and hence has a mixed bag of inhabitants from different faiths, ethnicities and beliefs. The locals thrive in peace and harmony and it is the perfect place to catch a glimpse of the myriad hues of the heterogenous fabric that colours and forms the Indian culture, co-existing together as a part of a seamless mélange.

How To Reach Abohar:

By Air: Abohar does not have an airport but the nearest airport to the town is located in Ludhiana at a distance of 180 km away from the town. The Raja Sansi Airport of Ludhiana is well connected to all the major cities of the country.

By Rail: Abohar has a railway station, the Abohar Junction, located at its heart, so the most favourable way to reach this town would be by train as the station is well connected to rest of the country.

The winter months are considered as a favourable season to visit this place. In the months of and between October and March, the weather remains pleasant with a maximum and minimum temperature ranging from 20°C to 32°C.

Places To Visit In Abohar:

The Abohar Wildlife Sanctuary is a major crowd-puller in the town. Maintained, protected and conserved by the Bishnoi community, the sanctuary is a humble abode to a number of endangered and endemic species like the endangered black buck deer, nilgai, porcupines and many others. Shrouded with verdant green forest the sanctuary is a delightful getaway for the tourists, the travellers and the locals alike.

Standing as a testimony to the diversity of the Indian culture and religions, the Johri temple in Abohar is well known as one such spiritual sanctum, which is crowded for its unique acceptance of heterogenity in the country. The temple houses the idol of the Hindu deity Lord Hanuman and the most unique fact about the temple is that, it embraces people of all kinds, irrespective of their race and religion. Diverse group of people flock the premises of the temple to seek blessings from the deity. Nestled on the old Fazika road in Abohar, make sure you visit the shrine when in town, to experience the acceptance of the diverse culture and religions of the country in such a special way by the people of Abohar.

One of the most popular recreational parks of the town, the Nehru Park with its long wide stretches of greenery and gorgeously planted flowers, is one of the most important attractions of the town. Artfully crafted plantations and pavements, sprawling evergreen and well-maintained lawns are some of the things that would make you want to spend hours upon hours just contemplating the beauty of it. The park hosts several other amusements to catch your fancy. With refreshments and eatables available in the park, the place makes for a great place to hang out at and spend some quality time frolicking or just lazing around with your near and dear ones.

Bringing to view the brilliance of the rich legacy of the Panj Peers in Abohar, the Panj Peer Tibba Shrine stands as a pillar of brotherhood and harmony of the cultural and religious diversity of the country. It is a shrine of Muslim saints looked after by a Hindu family and visited by people of all religions. Serving not just to the devotees' and the visitors' religious sentiments, the Panj Peer Tibba Shrine beckons and embraces the diverse cultural and religious identity of the country.

Comments
Read more about: punjab pilgrimage wildlife
Other articles published on Mar 8, 2019
We use cookies to ensure that we give you the best experience on our website. This includes cookies from third party social media websites and ad networks. Such third party cookies may track your use on Nativeplanet sites for better rendering. Our partners use cookies to ensure we show you advertising that is relevant to you. If you continue without changing your settings, we'll assume that you are happy to receive all cookies on Nativeplanet website. However, you can change your cookie settings at any time. Learn more
Change Settings Continue