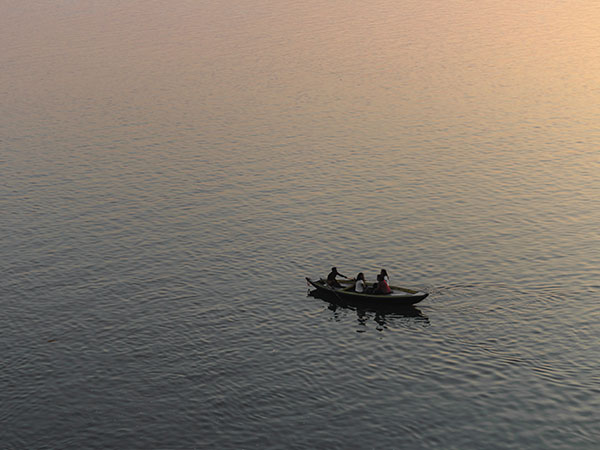 The temple town of Vindhyachal, located in the district of Mirzapur, in Uttar Pradesh, is nestled on the banks of the Ganga river. The town is a famous pilgrimage hotspot, and usually does not make an obvious choice for a break in Uttar Pradesh, but this little town is bathed with religious, cultural and historical relics. Vindhyachal is a rich reserve of cultural heritage and is considered as a major 'shakti peeth' in India. Legend has it that Vindhyachal is home to the Hindu Goddess Durga, who chose this as her place of abode after killing the mythological figure of Mahishasura. Don't miss out on the incredible places to visit in Vindhyachal and soak in the town's culture and history.

The Vindhyavasini Devi temple, as the name suggests, is dedicated to the Hindu Goddess, Maa Vindhyavasini, the incarnation of Goddess Durga. It is believed that Vindhyachal is the very place where the Goddess took refuge after killing the mythological figure, Mahishasura. The Vindhyavasini Devi temple is of immense spiritual significance and has stories and myths to tickle your fancy. The temple is nestled on the banks of the holy river Ganga and people who visit the temple, mostly prefer to take a dip in the river, as the myths have it, that this lets them wash away their sins and they can start a new life thereafter. The shrine boasts of the idol of the Goddess sitting on the back of a lion. The idol is carved in black stone. The temple complex also houses other shrines dedicated to many other Hindu deities. The temple is always busy with tourists and devotees from all around the world and makes for a popular tourist destination in Vindhyachal.

Vindhyachal has temples by the dozens, and the Kali Khoh temple makes one of the most important pilgrimage and tourist destinations in the town. Thousands of tourists flock around the shrine to marvel at its architectural beauty. Craddled in a cave, among the Vindhya mountain ranges, perched atop a hillock, the Kali Khoh temple is near about 2 km from the Vindhyavasini Devi temple. This ancient shrine is devoted to the Hindu Goddess Kali and houses its idol. The temple is set against the backdrop of the mighty mountains of the Vindhya range punctuated with lush green thickets and sparkling rivulets. The very peaceful atmosphere of the place makes this spiritual sanctum a must-visit spot for the travellers. The temple is also home to a number of tantriks, who usually perform several rituals for the fulfillment of the desires of the devotees and to cure them of diseases.

The three temples, the Vindhyavasini Devi temple, the Kali Khoh Temple and the Ashtabhuja temple, together constitute a 'triloka', which translates into 'three worlds', and the devotees consider it an act of great religious merit to walk around them. This auspicious ritual is called Triloka Parikrama.

Sita Kund, which is a small spring, located on a hillock in Vindhyachal, has an interesting history behind its name. Myth has it, that the origin of this spring dates back to the time when the mythological figures of Sita, Ram and Laksman were returning after their victory in Lanka. Sita got thirsty and due to the dearth of water close by, Lakshman shot an arrow into the earth and a stream of water gushed out of the spot, hence forming the Sita Kund. The Sita Kund is a perennial spring and makes for a tourist hotspot for all the scenic splendour it is enveloped by and, of course, for the myths and stories. The kund is flanked by three other temples of the Hindu deities of Hanuman, Ram Janki and Durga Devi.

Vindhyachal is known for comprising a subtropical climate, so the winter months make the most favourable time to visit this town. In the months of and between October and March, the weather remains pleasant with an average temperature of 23°C to 25°C.

How To Reach Vindhyachal

By Air: The closest airport to Vindhyachal is located at Varanasi, which is at a distance of about 51 km from the town. Frequent cab services are available from the airport to reach the place.

By Rail: The Mirzapur junction, which is at a distance of about 7 km from the town, caters to the railway network of Vindhyachal quite efficiently. The junction is well connected to all the major cities of the country.

By Road: Vindhyachal is well connected to cities around its vicinity, through the roadways. With convenient cab facilities and well-connected bus services, Vindhyachal is easily accessible by a network of roads and its bus terminus, the Vindhyachal bus station, is located right at the heart of the town.