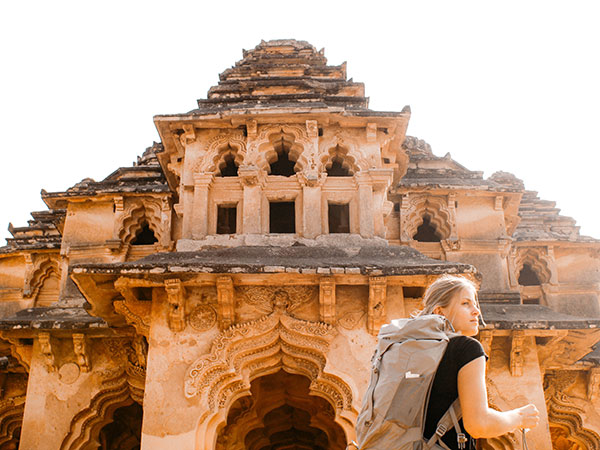 Prepare to marvel at the architecture and lacquered facade of ornate buildings, in the glorified regal capital of the Hoysala kingdom in the 12th century, Halebidu. The name Halebidu literally translates to "the old city", and was known as Dwarasamudra which meant "entrance to the ocean". The town got its name as it was damaged and deserted into "old capital" after being ransacked and looted twice by the Islamic forces of the Delhi Sultanate in the 14th century.

With its rich cultural background and heritage, Halebidu is home to some of the best examples of the Hoysala architecture, which are all bathed in a nostalgic shade of history. Halebidu puts you in a time warp with that timeless old world charm of the historical marvels, and here is a list of must-sees when in town.

Belur, the twin place of Halebidu, lying against the banks of the river Yagachi in the Hassan District of Karnataka, boasts of exquisite temples which reflect the exemplary artistic taste and technique of temple builders of the yore. This small town was the capital of the mighty Hoysala empire and their craftsmanship genius and the finesse in engineering can still be witnessed in the temples that stand here today.

The temple walls are replete with intricate detailed work of the sculptures and carvings exhibiting the rich culture and traditions of the old days. Some of the important shrines that are located here include the Chennakesava Temple and Kappe Chennigaray, both of which are exemplary Dravidian pieces of architecture. Legend has it that it took nearly 103 years to complete the construction of the magnificent Chennakesava Temple. Visit this destination for a glorious peek into the Hoysala engineering genius.

The Yagachi Dam, built by the damming of the river Yagachi, is a major tourist attraction among the locals and the tourists alike. The dam stretches over a vast area and there is clean pristine water as long as the eye can see. With its serene beauty, the dam is untouched by plastic waste.

The dam's striking milieu bestowed with the stunning panoramic view of the Yagachi river is beyond description. Some interesting activities to try out for that much-needed adrenaline rush are the banana boat ride, cruise boat, speed boat, kayaking, jet skiing and so much more.

Rich in art and architecture, the town of Halebidu is home to the famous Hoysaleswara Temple, a 12th-century Hindu temple dedicated to Lord Shiva. This architectural marvel is known as one of the three most notable monuments of the ancient Hoysala empire, also deemed as the largest monument dedicated to Lord Shiva in the southern peninsula; it is proposed to be listed under the UNESCO world heritage sites.

The Hoysaleswara Temple was built by Ketumalla and is attributed to the then ruler and his queen, Vishnuvardhana and Shantala. This architectural marvel is built of soapstone and is guarded by a monolithic Nandi. The walls of the temple are adorned with a legacy of stories and legends from the Hoysala period. Its extremely elaborate walls boast of the intricate carvings and sculptures of various Gods and brave Hoysala soldiers.

The temple attracts tourists in droves from all over the world. The charm of this architectural grandeur now remains in ruins because of the Mughal invasion in the late 14th century. Explore the remaining fragments of this Hoysala magnificence scattered all around the place.

The Basadi Halli (or Jain temples) is an elaborate housing of three Jain temples of lord Parshwanatha, Adinatha and Shantinatha. The rulers of the 12th century followed Jainism, and despite the fact that Halebidu is home to many Shiva temples, the Jain temples in the town are at par with the architectural grandeur and brilliance of the Hindu temples. The temples are the epitome of finest craftsmanship with exquisitely carved 12 pillars dotting the temples and the 14-ft-high Parshwanatha Swamy figure made completely out of black stone. The temples are known for their highly polished pillars that almost look like as if they are mirrors.

The weather in Halebidu, like most places in South India, is warm and humid throughout the year. The months of October to February make for the best months to visit Halebidu, as the temperature never soars above 25°C. At this time of the year, the weather is pleasant, making it the most favourable time to visit the place.

How To Reach Halebidu

By Air: The nearest domestic airport to reach Halebidu is the Mysore Airport, which is nearly 160 km away from the town. Other than that, the Kempegowda International Airport located in Bangalore makes for the nearest international airport, which is around 230 km away from the town. From both the airports, frequent cab services are available to reach Halebidu.

By Rail: The nearest railheads are located at Mysore, Mangalore and Hassan which are connected to all the major cities in the country. Frequent cab services are available from these railway stations.

By Road: The town of Halebidu is very well connected to other parts of the state and the country by buses. The bus junction is located at Belur.

Comments
Read more about: karnataka pilgrimage halebidu
Other articles published on Jul 31, 2014
We use cookies to ensure that we give you the best experience on our website. This includes cookies from third party social media websites and ad networks. Such third party cookies may track your use on Nativeplanet sites for better rendering. Our partners use cookies to ensure we show you advertising that is relevant to you. If you continue without changing your settings, we'll assume that you are happy to receive all cookies on Nativeplanet website. However, you can change your cookie settings at any time. Learn more
Change Settings Continue