Nativeplanet
»
Travel guide
»10 Places To Travel In Rajasthan In July

10 Places To Travel In Rajasthan In July 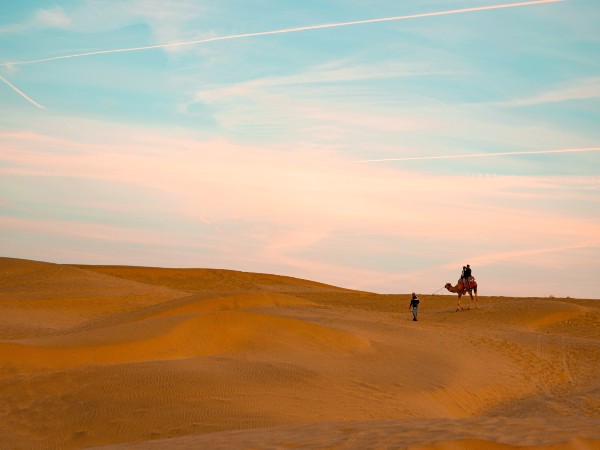 Featuring a mish-mash of magnificent forts & palaces, colourful cities, lavish heritage sites and hotels, diverse wildlife, serene lakes and boasting a fascinating history and cultural treasures, Rajasthan is a land of royals and more. Also known for the undulating and arid dunes of the Thar Desert, this princely state is a must-see. Whether you like to spend a night in the dunes under the stars, stroll amidst colossal forts, shop for traditional handiworks, or indulge in sumptuous thali fit for a king, there is so much to see and do in Rajasthan.

Located amid the hills of the Aravali range, Alwar is one of the most-visited tourist hotspots in Rajasthan. And it is revered for its historical importance. Found in 1049 by the Rajput king, Maharaja Alaghraj, Alwar has been a Rajput state for a very long time. However, it fell into the hands of Mughals in the early 16th century; thus, Alwar exhibits Mughal influence in some parts of its region. Some of the major attractions in Alwar include impressive royal palaces, gorgeous lakes, towering forts as well as temples.

While Rajasthan is associated with the dry and arid desert, surprisingly it is home to a hill station too. Located at an altitude of 1722 m above sea level; Mount Abu, the state's only hill station is blessed with lush eco-friendly hills of the Aravalli range. It rests in the Aravalli range at the border of Rajasthan and Gujarat. Besides being a notable tourist attraction courtesy of its location and space, Mount Abu is also home to vast stretches of serene lakes, green forests, as well as gushing cascades. Mount Abu allows you to relish amidst breathtaking views, around the year.

Far-famed as the industrial city, Pali made waves in Rajasthan as a centre of merchant activities during the 18th and 19th centuries. Positioned on the banks of the Bandi River, Pali is a famous town in the Marwar region of Rajasthan. Besides being a prosperous town, Pali hosts many 'Baoris' - unique wells exhibiting steps that are intricate and artistic in design. History buffs from all around the world visit this mystical land, to understand more about ancient Indian culture and civilisation.

Nagaur is a historic city that is nestled between the two most popular traveller hotspots in Rajasthan, Bikaner and Jodhpur. One of the common sights in Naguar is the breathtaking view of the red chillies being dried in the vast open fields spread across acres and acres of land. Nagaur also experienced the prowess of Great Rao Amar Singh Rathore who challenged the mighty Mughal Empire. The massive old Fort has numerous remarkable stories of bravery of the once leaders of the states.

Far-famed as the Pink City, Jaipur is known for its vibrant culture and colourful streets. You can visit Jaipur any time of the year, and the Pink City will welcome you with arms wide open. The colours of Jaipur bloom beautifully round the year with a wide array of historical forts and splendid palaces. Tourists who crave luxury and comfort, have much to look forward to in this royal city.

A tour to Jodhpur can be relished by finding accommodation in heritage hotels in Jodhpur. Most of the palaces were constructed by royals to exhibit luxury and their privileged lifestyle; however, it is open for accommodation to tourists and travellers to experience royalty at its best. Besides its hospitality, one can hire a cab or take a ride across the city to witness tens of thousands of blue-painted buildings and old yet well-maintained forts spread across the vast landscapes of the blue city.

Pushkar is considered a holy pilgrimage for Hindus having 410 small temples and about 50 ghats. Nevertheless, Pushkar is a rustic holy destination that draws a lot of backpackers and hipster types. And it is an excellent place for candid photographers, for the reasons mentioned above. Pushkar is one of the best places to witness a traditional Indian culture. Some of the attractions of this place are Pushkar Lake, Brahma Temple, and Savitri temple.

The whistle of the wind in the desert sounds gratifying while taking a camel ride or jeep safari in Jaisalmer. Jaisalmer is an extraordinary sandstone city that rises magically from the dunes of the Thar desert and becomes more fun-loving and enjoyable if traversed well. The daybreak and twilight are worth a million dollars when viewed from any of the numerous forts present in Jaisalmer. Jaisalmer is more or less a place of contemplation.

Decked with numerous lakes and royal palaces, Udaipur is renowned for being the most extravagant city in India. The best place to visit in Jaisalmer is Lake Pichola! In the centre of the lake, there is the beautiful Taj Lake Palace, which was built more than two centuries ago, and is unquestionably the main attraction of the city. There are many ghats giving access to the lake where people bathe, wash their clothes or make offerings providing an opportunity for travellers to get Insta-worthy pictures.

One of the lesser-known tourist destinations, Bikaner is a remote and quaint desert town. Since it is not commercialized, Bikaner remains in its natural condition. However, it is famous for the Karni Mata temple, or Temple of rats, the city has many other places to visit, including the impressive Junagarh Fort, the Lalgarh Palace and the Shiv Bari Temple. It's an excellent place to book a camel tour.