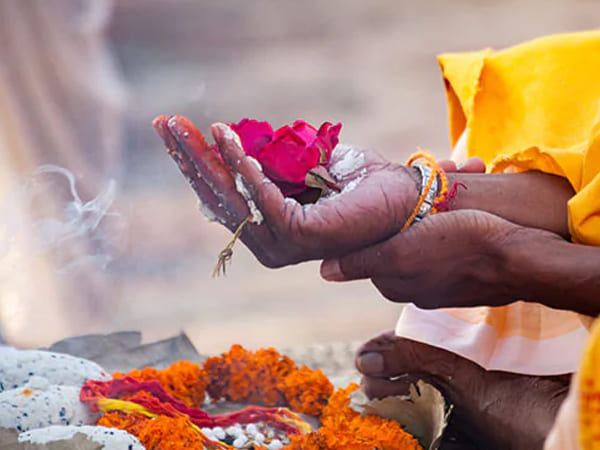 Life is a journey. That's a common saying!
What about Death? Do you think death is a journey?

Well, we bring you the most celebrated ritual that will help you understand, what death truly signifies in Hindu culture.

People, irrespective of their sex, creed, or religion, understand the significance of life! And if there is a common thread that unites every living soul in this world, it is birth and death. When it comes to religion, Hinduism is no different. Hinduism is a religion that celebrates the journey of life. Life and death are revered equally in Hinduism, as millions of Hindus believe death is a farewell of the soul from the material world to the spirit world. Thus, Hindus famously celebrate "Pind Daan" to venerate ancestors and facilitate their departed souls toward redemption.

It is believed, the soul of the departed will suffer in hell, and the members of the departed's family may follow suit if the ceremony is not conducted. In other words, Pind Daan ceremony liberates one soul from suffering and helps attain moksha or salvation. Pind Daan has been practised for ages. The traditional Pind Daan ceremony involves pooja and chanting of hymns or mantras proffered by distributing handouts to the sick and poor.

We bring you some of the most important places to offer Pind Daan during Pitru Paksha 2021; it begins on September 21 and ends on October 6.

It is a charming city located on the shores of the Ganges and its appeal raises even more during the nightfall. There is a popular notion that taking a dip in the Ganges here cleanses all sins and if a departed's body is cremated here, then his soul attains Moksha. The Pind Daan ceremony, if carried here, brings enduring peace to the departed's soul and brings peace to the surviving members of the family as well. Haridwar is one of the most divine pilgrimage hotspots in India.

Beautified with splendid temples, Mathura owns the rank of a holy place in India and beyond. It is a sacred town and also one of the visited places for Pind Daan services. Such ceremonies are carried at Vishranti Tirtha, Bodhini Tirtha, and Vayu Tirtha located on the shores of river Yamuna. People delight their lost ancestors by offering tarpan in Mathura.

Ujjain is a famous temple city and a perfect place for Pind Daan rituals. Pind Daan is conducted on the shores of Shipra river which passes through the city. And distributing Pind on the shores of the river here is deemed remarkably beneficial. Besides countless pilgrimage centres in Ujjain, places like Bhartrihari Caves and Kalidas Academy are worth visiting. Tourists and travellers from Ujjain also visit nearby places including Bhopal, Omkareshwar, Baswara, and Chittorgarh.

There is a popular belief associated here that by performing ancestral rites at Prayagraj, formerly known as Allahabad, at the confluence of the Ganges-Yamuna-Saraswati rivers, all the sufferings that a soul has to go through after death, are removed. The sufferings are removed by performing Pind Daan here. By simply taking a bath in the waters here, sins are washed away and the soul becomes free from the cycle of birth and death. Allahabad is also a very good place for tourists to visit. When you explore this place well, then you have many options to visit famous places around like Lucknow, Varanasi, Kanpur etc.

Ram Janmabhoomi is also a pilgrimage site and one of the best sites for Pind Daan ceremonies. On the banks of the holy river Sarayu is the Bhat Kund where people fulfill their obligation to perform rituals presided over by a Hindu Brahmin priest. As a custom, people also conduct havans here for their ancestors. Families first take a dip in the river and then sit for rituals, after which they offer alms to the poor and then return home. Ayodhya has a lot for tourists to see, some of the major ones being Faizabad, Bithoor, Jaunpur, Varanasi, Pratapgarh and Basti which people must visit to visit.

Gaya is another important place in Bihar for Pind Daan. The ceremony is usually held on the banks of the river Phalgu which is said to be an incarnation of Lord Vishnu. Gaya is believed to be a suitable place to perform Shradh for its alleged purifying powers. This place is mentioned in both Ramayana and Mahabharata as Gayapuri. Presently there are about 48 places in Gaya where Pind Daan is performed. The Mahabodhi Temple, Brahmayoni Hill and other related sites in Gaya attract a lot of tourists throughout the year, later, tourists leave for Varanasi and Patna.