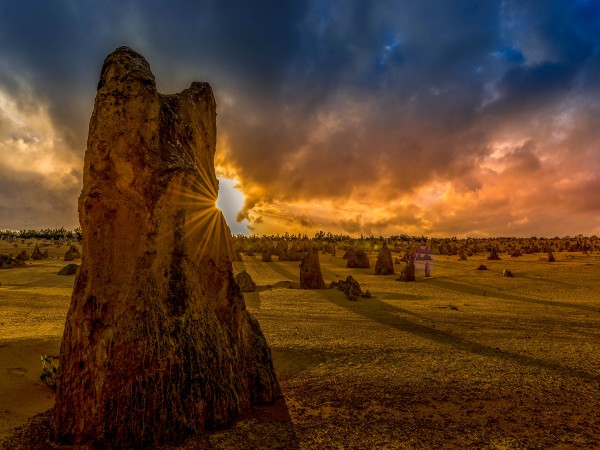 Nothing but the sighing and moaning of the world breaks the eerie silence of the Pinnacles Desert. Any science-fiction writer seeking a setting for a spine-chiller needs to look no further than this alien spot not far from the coast of Southwest Australia. The necessary ingredients are there - a stark forest of standing stones in an area practically devoted to vegetation; not a sign of life or human activity, just the bright yellow, wind-stirred sand.

The Pinnacle Desert, one of Australia's many amazing natural landmarks, is a short drive from the nearest town, Cervantes. The road is now sealed all the way, but at one time only heavy-duty vehicles could go there because the exposed limestone outcrops shredded the tyres of ordinary cars.

The journey is well worth the effort. The first, the spellbinding view of the pinnacles is of an enchanted, moon-like landscape, with sharp shadows accentuating the weird, jagged shapes. Sombre grey stones 3-16ft (1-5m ) tall rise sheer from the flat sand floor, guarding the buried secrets of tens of thousands of years. Deep into the area the colours change, and grey gives way to gold. Some of the stones are the size of cars, some of the stones are the size of houses, and others are as small and slim as pencils. Thousands of them cover an area of 1 1/2 sq miles (4sq km) of the desert.

Each pinnacle is different. Their surfaces may be smooth or honeycombed, and their shapes vary. One group resembles huge milk bottles waiting to be collected by a phantom milkman. Another has been named 'Spectres in Silhouette', with the central pillar seen as the figure of Death counselling a surrounding ring of ghosts - 'Camel', 'Molars', 'Kangaroo', 'Gateway', 'Garden Wall', 'Red Indian Chief' and 'Elephant Foot'. Although the pinnacles are thousands of years old, they must have been uncovered from the sand in fairly recent time, maybe within the last 100 years.

Until Harry Turner, a Perth historian came across them in the 1950s, they seem to have been unknown, apart from vague, word-of-mouth tales that early Dutch seamen had seen what they thought were the ruins of a city in the area. In the last century, the pinnacles were never mentioned. Had they been visible, they would surely have been known 19th-century stockmen on regular cattle drives south to Perth along the sandy coastal track. Nearby Flourbag Flat was a resting and watering place for drovers.

Explorers George Grey, who was later to become Governor of South Australia and be awarded a knighthood, must have passed close to the area in his journeys of 1837-38. He was a meticulous diarist, yet he recorded nothing about the Pinnacles.

Scientists assess the stone pillars to be 20,000-25,000 years old and are coaxed, that they must have been exposed on at least one occasion before this century because Stone Age artefacts and shells were found stuck to the base of some pillars.

But later the stones must have been submerged by the sand again for maybe thousands of years because they do not figure in Aborigine lore. Nor were they mentioned by the Dutch navigator Abraham Leeman, who was stranded in the area in 1658. Yet Leeman noted in his diary the existence of two large hills, the North Hummock and South Hummock, which lie close to the Pinnacles. Had the limestone pillars been visible, he would surely have recorded the fact.

As the wind blows through the desert, it continually shifts the soft, loose sand to expose new aspects of the dunes and cover others. So in a few centuries more, the Pinnacles, now part of the Naumburg National Park, may once again disappear from view. Should this happen, their presence has at least now been recorded in print and picture.