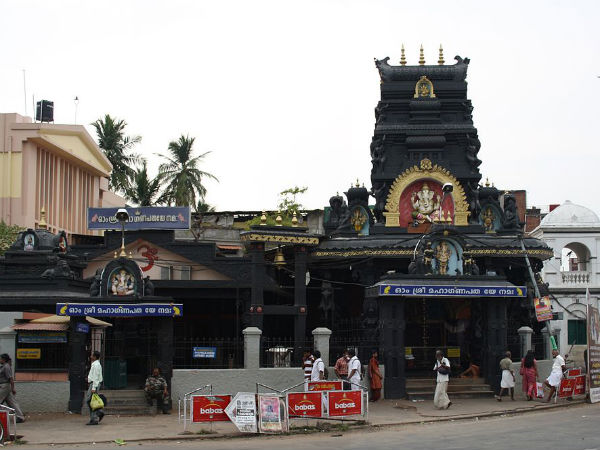 Ganesha is one of the most revered gods in the Hindu religion. Various mythological tales about Ganapati draws attention to his power. There are many shrines and local legends to indicate the respect for the elephant god. Pazhavangadi Ganapathi Temple is one among the prominent temples in Thiruvananthapuram.

As per the local history, the original Ganesha idol was worshipped by a soldier of Tranvancore army at Padmanabhapuram. Later, the idol was shifted to the city of Thiruvananthapuram, and a temple was constructed. Today, Pazhavangadi Ganapati Temple holds a great importance in the city.

The beautiful and elegant architecture of the shrine draws the attention of many visitors year-round. In fact, its proximity to Sri Padmanabhaswamy Temple is an added advantage as the devotees can visit both the shrines.

Ganesha idol looks beautiful in his sitting posture; he sits with the right leg folded stance with his vahana (vehicle) rat at his foot. Sri Maha Ganapathy is the presiding deity of this temple. Carved sculptures depicting various forms of Ganesha are the interesting features of this shrine.

The Pazhavangadi Maha Ganapathy Temple is a must visit shrine near to Sri Padmanabhaswamy Temple. Special poojas are performed during the time of festivals like Ganesh Chaturthi, Navaratri and so on.

Dress code is observed in many shrines across India. Similarly, at Pazhavangadi Maha Ganapati Temple men have to be dressed in mundu (dhoti, vesti) and women have to wear saree or salwar to enter the sanctum.

Don't miss out on a visit to this small and historical shrine on your Thiruvananthapuram trip.

All religious places are an integral part of history and traditions. In fact, it is always exciting to know about the legends that popularised these beautiful shrines. Similarly, Pazhavangadi Ganapathi Temple is one of the must-visit shrines that has been an important part of the Thiruvananthapuram's history.

Comments
Read more about: temples religious travel travel with ganesha thiruvananthapuram
Other articles published on Sep 2, 2016
We use cookies to ensure that we give you the best experience on our website. This includes cookies from third party social media websites and ad networks. Such third party cookies may track your use on Nativeplanet sites for better rendering. Our partners use cookies to ensure we show you advertising that is relevant to you. If you continue without changing your settings, we'll assume that you are happy to receive all cookies on Nativeplanet website. However, you can change your cookie settings at any time. Learn more
Change Settings Continue