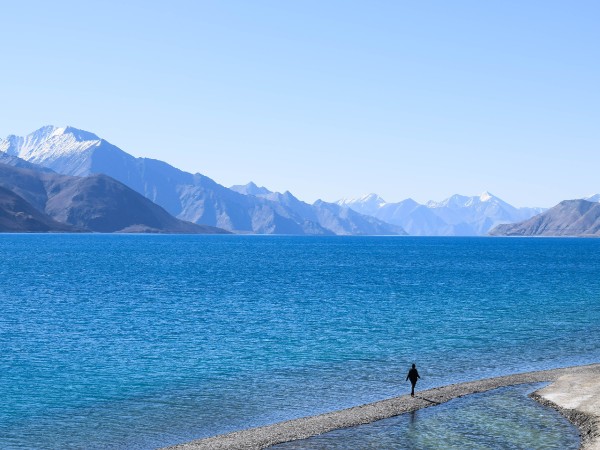 The Ladakh Adventure Sports Foundation organized the marathon in an effort to use sports to raise awareness of the problem of climate change. "The Pangong Frozen Lake Marathon", affectionately known as The Last Run, will be held in Ladakh on February 20, 2023. The location is ideal for the 21 km long marathon, which is the first of its sort in India. For this occasion, registration is already open.

Athletes have the opportunity to break a world record by competing in the highest frozen lake marathon in this high-altitude race, which also offers breathtaking vistas of the Himalayas. Similar races have been held in the past in nations like Norway and Russia, but none have been at a height of 13,862 feet. Because they want to use sports to raise awareness about climate change, the organizers of the marathon are also encouraging people who want to walk for a cause.

A group of young people will run a marathon on Pangong Lake in this. A young man named Stan (Tsetan) initiated this campaign. Additionally, he is a part of ice hockey for the Indian team. The reason it is being referred to as the final run is that Pangong Lake won't be able to ice in the near future owing to climate change. If we don't pay close attention to this sight now, Tsetan warns, it will be uncommon for the following generation.

Everyone is aware of Pangong Lake, according to Tsetan, but few people are aware that the glaciers in the Himalayas are melting quickly. Pangong Lake won't eventually freeze for the same reason. Pangong Lake is 700 square kilometers in size and is located at a height of 14,000 feet. Over the Indo-China border, it is spread. Here, a thick coating of ice freezes from November to March. China owns two-thirds of this lake, while India has one-third.

The marathon, which will occur at an altitude of 13,862 feet, will be the first of its kind to ever take place in the globe.

The marathon trail will be challenging due to the ice and cold, thus runners will be chosen based on their prior marathon and other high-altitude adventure sports experience (10,000 ft and above). Running participants must go through the required acclimatization phase.

Those who want to take part must choose the complete marathon package which includes the acclimatization activities. The 9 days and 8 nights package also includes lodging, meals, as well as airport and other transfers to & from Leh. The best clothing and equipment for the extremely cold and ice race, such as spiked shoes, are advised for runners to bring along with them. A medical team & hot water will be made accessible every 5 km, according to ASFL. Additionally, an ambulance will be available the entire time. In light of the area's preexisting ecological sensitivity, it is crucial to mention that only a small group of runners will be chosen for this.