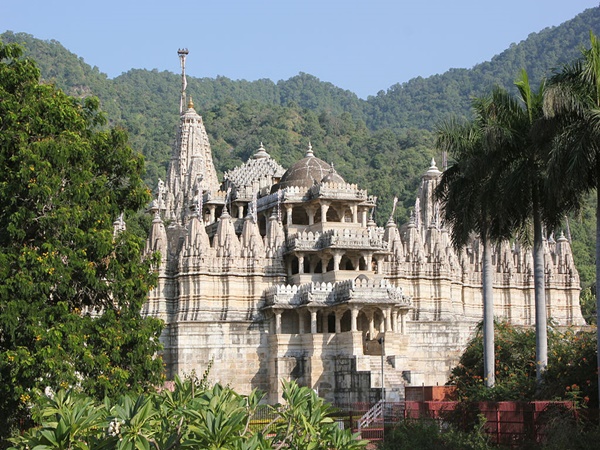 Considered to be the holiest Jain pilgrimage site, the Palitana Jain temples seem to be floating pieces of ivory miniatures cutting through the crimson sun rays when viewed from a distance. Palitana was an important province of the Saurashtra kingdom. This mountain city can be said to have the most profound ancient architecture which is one of its kind.

Sri Adinath, the first Tirthankara, had attained nirvana here. An arduous trek of 3,500 steps leads pilgrims to the top where 862 marble carved temples are situated, providing evidence of the rich architectural heritage along with the loose remnants of disastrous invasions on the holy shrine.

Palitana has a pleasant climate round the year. Summers range from March to June which remains dry and hot. Winters are mild and cool and provide the best views of the nearby Gulf Of Cambay seacoast owing to clear skies.

Palitana has a pleasant climate round the year. Summers range from March to June which remains dry and hot. Winters are mild and cool and provide the best views of the nearby Gulf Of Cambay seacoast owing to clear skies.

How To Reach Palitana

By air: The nearest airport is Bhavnagar which is at a distance of 51 km. However, the best way to plan an air trip is via Ahmadabad for it is well connected to Delhi and Mumbai and offers a daily flight to major cities of the country.

By rail: Palitana has a small railway station connected to Bhavnagar. Most trains stop at Sihor which is connected to nearby cities of Ahmadabad and Gandhinagar.

By road: Hourly buses are available from Palitana to Bhavnagar. Private transport and cars also offer services from nearby cities. A planned road trip from Ahmadabad takes about 4 hours to reach Palitana and is the best option for car and bike rides during the early winters.

The temples have exquisite architecture and are ornamented in such a way that sunlight transforms the marble structures into ivory shields. Of the 863 temples, the temple of Adishwar is said to be the holiest one. Other major temples include the Adinath, Bimal Shah, Sampriti Raj, Kumarpal. The images of the main deity are carved in marble and outlined by precious stones and gold ornaments. It is thus no doubt that these temples fell into the hands of invaders several times.

The ancient Jain Digambar temple contains nine shrines alongside a number of idols of Tirthankaras. The main temple houses the shrine of Bhagwan Shantinath whose idol is carved in white marble along with idols of Bhima, Yudhisthir and Arjuna.

The hectic climb of 4000 steps might not leave you with much time in hand to visit all the shrines as nobody is allowed to stay within the premises at night, you may consider travelling to Chaumukha temple. The temple gets its name for the four-faced statue of Adinath which faces four major directions. Built in 1618, the temple has carvings of countless squares that converge towards the top into a dome. The innermost structure is said to represent the five sacred hills of the Jains.

Located at the base of Shratunjay hills, the Jain Museum hosts a collection of Jain artefacts that date back to 500 years old. Ancient manuscripts written on palm leaves, excavated idols dating back to thousands of years, this place is a truly a treatise for history lovers. The museum also hosts information on Jain history and exhibits on Lord Mahavira's life. The wonderful part of the museum complex is a round temple in the basement which features the images of four Tirthankaras, and beautiful mirror walls all around.

External invasions had made this mountain city a target during ancient times. Legend says that the dargah at the top of the Shratunjay hills was made to honour the Muslim Pir who had protected the citizens from the invasion of Allauddin Khilji. The dargah is known to fulfil wishes of childless couples and those with ailments. Numerous people from all religions visiting this shrine represent the perfect blend of diversity and religious harmony of the place.

While the climb to Palitana temples prohibits carrying of food by visitors, you will be delighted to see the wonderful traditional local cafes and restaurants at the base. The food served is vegetarian and included famous delicious dishes like the Khandvi and Thepla.

Comments
Read more about: gujarat
Other articles published on May 31, 2019