Offbeat Beaches In Southern India To Visit In April-May 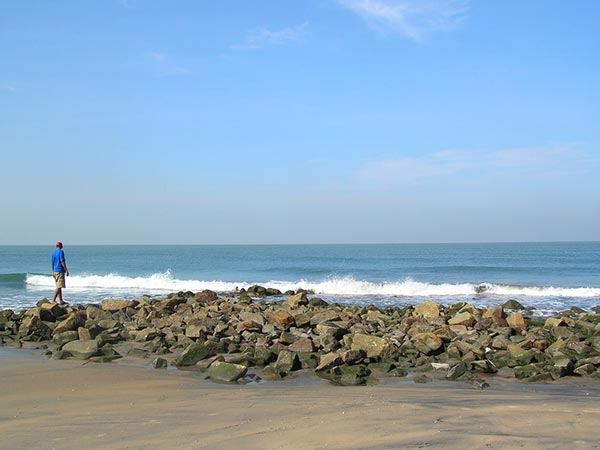 A beach vacation is loved by elders and children alike. The bright sun, the wet sand, splashing the water, endless hours of frolicking and lazing around in the shacks is sure to set the mood for your next holiday. Although April-May is extremely hot in terms of weather, it does not deter the tourists from visiting beaches.

A majority of people might find hill stations to be a great respite from the ungodly heat. However, the beach bums would rather spend their vacations sunbathing or swimming in the beach.

The famous and well-known beaches tend to get crowded during this peak season. These beaches offer no quiet time if you are big on privacy. Also, they are bound to get dirty. Therefore, this season it is time to explore some of the unconventional and offbeat beaches.

Allow us to break your bubble if you thought that the best fun can be had only in Goa or Andaman beaches. Here's our compilation of some of the off-beat beaches in South India that you can enjoy this summer with friends or family.

Popularly known as Bheemili, this serene beach is situated 25 km from Visakhapatnam in Andhra Pradesh. This beach is a hit with the local population, but not really very well-known among the tourists. The tides here are excellent for a relaxing swim in the sea. There is also the Bheemili Temple which is famous for the 13th century architecture. This is one of the beaches in India where one can find beautiful sea shells.

Located in the Kasargod district, Bekal beach is an exotic beach on the eastern shore of Kerala. This is a shallow beach. Although made popular by movies, Bekal beach still remains uncrowded and a favourite offbeat beach destination. Bekal is best known for the Bekal Fort, only after the beach. It is a giant keyhole-shaped fort that is the largest fort in Kerala. The Mangrove Trail of Malabar near Bekal offers activities such as hiking, boating and bird watching.

Kaup beach is in the Udupi district of Karnataka. This is a very quiet beach known for its lighthouse. It has appeared in many movies where the lighthouse has to be featured. The lighthouse is open to public from 5 pm to 6 pm. Situated 13 km south of Udupi, this beach is famous for three temples dedicated to Goddess Mariamma. There is also a fort built by Tipu Sultan that is not to be missed.

Situated at around 11 km from Alappuzha town in Kerala is Marari Beach. This picturesque beach offers grandiose views of sunset and sunrise. Dotted with coconut trees and golden sand, this beach is perfect to be enjoyed with friends or family. The Dutch Palace built by the Portuguese is a long stroll from Marari Beach. It is known for great architecture of the 14th century period. There are many Shiva temples around Marari Beach.

This is one of the longest beaches in Kerala. This is also a drive-in beach, located 7 km from Thalassery in Kerala. There is a private island called Dharmadam island which is 100 m away from this beach. You can walk yourself to the island when there is low tide. This beach is famous for blue mussels and so there are many restaurants around the beach that serve up this delicacy.

Located near Kundapura in Coastal Karnataka, Maravanthe beach is one of the loveliest beaches in Karnataka. On one side of the beach is NH 66 (national highway) and on the other side is river Suparnika. This makes for a splendid scenery. There is a Maraswamy (also known as Varahaswamy) temple located on the beach. Gangoli Port is near to Maravanthe and one can request the fishermen to accompany them to the sea for fishing.

The Kurumgad Beach is a tortoise-shaped island located off Karwar Coast in Karnataka. Enveloped by pristine blue waters, this place is accessible only through a 30-minute boat ride from the coast. Kurumgad is a brilliant beach surrounded by verdant greenery and is perfect to revitalize your soul. This beach is famous for the Narasimha Temple, which is a huge attraction for thousands of devotees. Kurumgad offers activities like boat rides, snorkelling, diving and tidal pool.

Muttom village in the Kanyakumari district of Tamil Nadu is known for the beautiful and serene Muttom Beach. It attracts less than 2% of the tourists that visit the Kanyakumari main beach, making it a highly favourable and preferred off-beat beach. Huge rocks stand guarding the beach on either side. There's a children's park on the beach. The Thiruanathikarai Cave Temple in Muttom is one of the major sites of religious importance in Jainism.

Located in Kovalam, Kerala, Chowara is a gorgeous beach with a blend of beauty and tranquility. It is right next to the Chowara fishing village. Chowara beach has an ayurveda resort on its premises, if you are interested in a massage. Chowara Aiyyappa Temple is situated on a hill nearby and offers fantastic views of the beach. Analothbhava Matha Church is a very ancient church known for its magnificent architecture located in Chowara.

Pichavaram is the second largest mangrove forest in the world and one of the well known eco tourism spots. It is located in Chidambaram, in Tamil Nadu. However, the beach is still an untapped potential that does not see throngs of visitors. It is very clean and the trees stand tall and majestic as a testament to this. This beach and the mangroves were pretty badly damaged during the Tsunami in 2004. However, it still looks pretty as a picture. A boat ride from the beach for 3 h takes you to the mangrove forests.

Kappil Beach is located at a distance of 7 km from Varkala, Kerala. The road which leads to the beach is belted by Arabian Sea and Edava Narayana Lake. The hordes of coconut groves add a panoramic and picturesque appeal to the beach. Kappil beach is a confluence of the sea, river and backwater, which makes it very special and exclusive. The backwater ride at the beach is jolly fun.

Belekeri beach in Uttara Kannada district, Karnataka is a beach not frequented by visitors, which makes it a perfect offbeat beach. The vast grassy lawn drops by 50 feet down to the beach without warning. The view of sunset and sunrise from this peninsula is striking and spectacular to watch. Jenubeera and Eshwara temple here are very famous temples from the 15th century. Belekeri Port was used by the British to export manganese ore.

A dreamy beach in Kannur, Kerala, Ezhimala beach is the true meaning of the word "beauty". The beach touches the foot of the seven peaks at Ezhimala, which is actually a hillock. Right above the beach and along the slope of the hill are stone pillars carved with mysterious figurines. There is also a fascinating burial chamber from the earlier eras near the beach. This beach is a favourite among dolphin enthusiasts. Dolphins are spotted near the Ettikulan Bay.

Ottinene beach, located in Byndoor, is 40 km from Kundapur, in Karnataka. This beach is secluded with not many tourists visiting it. The Kshitija Nesara Dhama is attached to the beach and maintained by the Department of Forests, Karnataka. There are a few rooms and a restaurant, if you wish to halt at this beautiful beach. You can also visit Somanatheshwara temple at Ottinene.

Located in Kochi in Kerala, Cherai Beach is the perfect hotspot for unconventional beaches. This beach is known for the fabulous scenery of the union of the backwaters and the sea. Cherai Beach is accessible only by boat. The low tides make this beach appropriate for long strolls and swims. You can also go dolphin spotting and boating here. The massive coconut groves and the Chinese fishing nets offer a great photo opportunity.

Comments
Read more about: beach kerala karnataka vizag andhra pradesh udupi mangalore
Other articles published on May 9, 2017
We use cookies to ensure that we give you the best experience on our website. This includes cookies from third party social media websites and ad networks. Such third party cookies may track your use on Nativeplanet sites for better rendering. Our partners use cookies to ensure we show you advertising that is relevant to you. If you continue without changing your settings, we'll assume that you are happy to receive all cookies on Nativeplanet website. However, you can change your cookie settings at any time. Learn more
Change Settings Continue