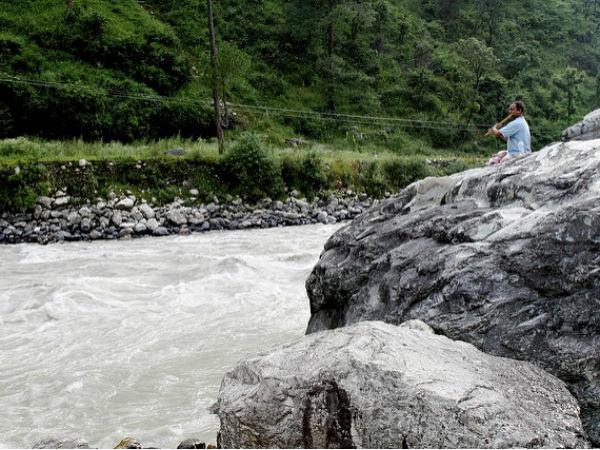 Give it a thought, what if places were books? If something of that sort happens then Netala would be a rare and timeless classic which would find its place in the highest rack of the book shelf which would be less touched and only habitual bookworms would reach for it.

Netala is one place which does not have much glitter and fanciness like other hill stations which would grab the attention of its visitors. The place is on the sober side and has its own charm and specialty hidden within itself. On the outside the place would not show the grandeur; it is kept hidden away from the glare of the passerby.

Around 85 km from Gangotri which is the source of Ganga and 8 km north of Uttarkashi, this place stands apart from the world outside. It is a small Himalayan hamlet which is situated right on the banks of the Ganga, which is totally disconnected from the outside world in every-sense, with no mobile networks, no guide maps but filled with unpolluted mountain air.

Home to around a thousand people and their domestic animals, this place has somehow managed to truthfully as how nature made it. But did change and fall prey to the rapids commercialization and other means of modernization which is very common amongst the other popular hilly getaways.

Across the Siror bridge are the humble mud houses of the local people where everyone knows each other very well not just by their names, but also their animals. They all share a common backyard which consists of mountains and mountain trails.

The local residents are so humble and friendly that the would call upon any traveller to their homes and offer them food and accommodation and would also take you around the mountainous terrain. The hospitality would also sometime pave way to wedding proposals only if you show interest in the proposal.

An early morning walk along the river opens up more expansive view in front of you. As welcoming as the water looks, it has a crushing cold which would give you the feel of cutting through your body in a matter of few seconds.

The high altitude and low roofs of the place look with the uninterrupted sky is best described in the lines of the Lebanese-American poet Kahlil Gibran - For that which is boundless in you abides in the mansion of the sky, whose door is the morning mist and whose windows are the songs and the silences of the night.

One can begin their journey to this hamlet in the early hours from Rishikesh as it functions as the mid point to Netala in middle of nowhere, though one must be very cautious of the falling rocks.

Netala is a perfect place for one to disconnect themselves from a world where a butterfly would not flap its wings without being tweeted, whatsapped, instagrammed etc.

Comments
Read more about: travel india nature religious travel unique travel ideas uttarkashi
Other articles published on Jun 2, 2017
We use cookies to ensure that we give you the best experience on our website. This includes cookies from third party social media websites and ad networks. Such third party cookies may track your use on Nativeplanet sites for better rendering. Our partners use cookies to ensure we show you advertising that is relevant to you. If you continue without changing your settings, we'll assume that you are happy to receive all cookies on Nativeplanet website. However, you can change your cookie settings at any time. Learn more
Change Settings Continue