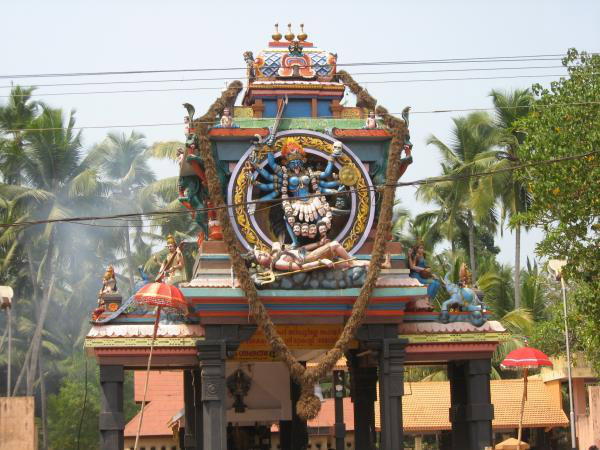 Kerala is known for its unique temples and temple architecture. There are several ancient temples that are even mentioned in Hindu scriptures. One such unique temple is Vellayani Devi Temple on the eastern banks of Vellayani Lake in Thiruvananthapuram.

Goddess Kali, the fierce form of Durga, is worshipped in this temple. In fact, Vellayani Devi Temple is the largest temple in Kerala dedicated to Goddess Kali.

The temple architecture is something worth a visit. Built using Dravidian style of architecture, the temple has a bronze roof which is adorned with traditional artwork. The temple towers or gopurams at the eastern and wastern ends of the temple are sculpted with several Gods.

Goddess Kali is the presiding deity here. Kali or Bhadrakali is the daughter of Lord Shiva. The idol of the goddess is placed facing the north. In Malayalam, the deity here is called as Thirumudi, and the idol of Vellayani Temple in Thiruvananthapuram is one among the largest Kali idols.

There are other deities worshipped in the temple along with goddess Kali. These deities are Lord Shiva, Lord Ganesha and Nagaraja. The temple compound also has another smaller temple where a deity Madan Thampuran is being worshipped.

Since the history of the temple is connected to two Hindu communities Nair and Kollan, the temple authorities are not Brahmins like in other temples of Kerala. Here, the right to do the Uchabali, which is a temple ritual during the festival, belongs to the Nair and the priest of the temple belongs to the Kollan community.

The major festival of the temple is Kaliyoottu Mahotsavam, which is translated as "festival to feed Devi". The festival lasts for 56-60 days and is held between Febraury and April once in three years. During the festival, the idols of Devi and Darika (demon killed by Kali) are placed on two raised platforms facing each other which is symbolic of the fight between the two powers.

The temple is located quite close to Thiruvananthapuram International Airport and Trivandrum Railway Junction. Since it is in the heart of the capital city, the temple is also easily accessible by road from other cities in Kerala.