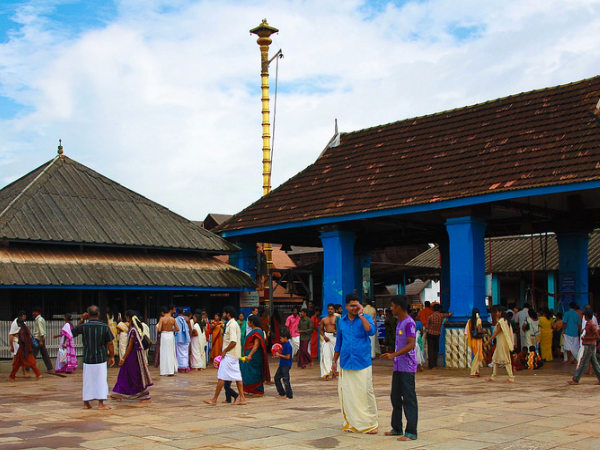 Chottanikkara Bhagavathy Temple is one of the famous Bhagavathy temples in Kerala, and also one among the most popular temples of the state. Located at Chottanikkara near Kochi, the temple deity Bhagavathy is believed to cure mental illness and other ailments of her devotees.

The temple is decked with Vishwakarma sthapathis (wooden sculptures) that are unique to ancient Kerala. The golden idol of Bhagavathy is always adorned with flowers, garlands and jewels. The presiding deity here is known by several names like Saraswati, Rajarajeswari, Bhadrakali, Amman and Durga.

Navratri Aghosham is also one of the important festivals of the temple. On the 10th day of Navaratri utsavam, Vidyarambham is held in the temple, where children aged 3 to 6 are introduced to the world of knowledge. The other days of Navratri namely Durgashtami and Mahanavami are also celebrated with elephant processions, annadanam (offering food) and cultural programmes in the temple premises.

During Karkkidakam, the Ramayana Masam is observed with daily annadanam, reading of Hindu scriptures like Ramayana and Bhagavatha, devotional speeches, etc.

Some of the tourist attractions near the temple are Kerala Kathakali Centre, Kashi Art Gallery, Santa Cruz Basilica and Mattanchery Palace among the rest.

How to Reach Chottanikkara Bhagavathy Temple

Located in the outskirts of Kochi, you can take local buses to the place from the city. Ernakulam Junction Railway Station is the nearest railway station, which is around 18km from the temple. The nearest airport is the Kochi International Airport located around 38km from here.