Nativeplanet
»
Travel guide
»Navratri And Durga Puja Special 2021: Here's How The 9-Day Festival Is Celebrated In Different Parts Of India

Navratri And Durga Puja Special 2021: Here's How The 9-Day Festival Is Celebrated In Different Parts Of India 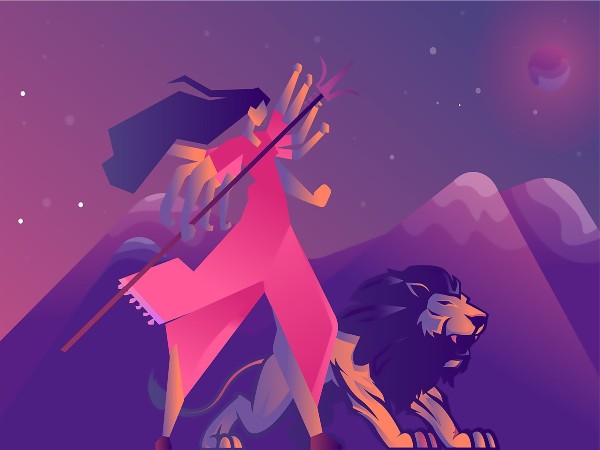 India is a diverse country. Everything in India is unique, from food to language to culture. So, you can picture how religious views and customs differ depending on which geographical location we find ourselves in. This regional difference gives a unique regional touch. Though the religion in India is like a tree, its branches reach out to different areas, and the way of communicating takes a different flavour.

Navaratri or Dusshera is one such tree, and its different branches and customs is a clear example of lauding a distinctive regional touch. "Nava" meaning 'nine' and Ratri meaning 'rights'; Navaratri means 'nine nights' in Sanskrit. During Navaratri, nine diverse forms of the goddess are worshipped. It celebrates the time and space that helps us rejuvenate and cleanse ourselves from within.

Now let's see how Navratri is observed in different parts of India and jubilate its sheer diversity.

Navratri is marked as the triumph of Lord Rama over the wicked king Ravana. It ends in the glorification of the Ramlila which is performed ceremoniously during Dussehra. The puppets of Ravana, Kumbhakarna, are fired to commemorate the triumph of good (Rama) over sinister forces on the 'Vijaya Dashami' day.

Navratri is loaded with Yagnas, rituals, special pujas, meditations, fasting, observing silence, chanting, and dancing worshipping Mother Divine, her entire creation - all forms of life, all forms of art, music, and knowledge. She is worshipped as the saviour of mankind from ignorance and all forms of evil.

Up north, the custom of giving gifts on Navratri is rather common. These could be sweets, Indian clothes for both men and women, and also, something useful for the house. Shares Shobhita Sharma, a Delhi-based architect, about Kanya Puja, "My fondest memory of Navratri is being invited by the neighbours on the eighth and the ninth day, and being revered like a goddess. Of course, it helped that my other girlfriends and I were given some money and sweets at the end of the ceremony too."

In south India, Navratri is the time to invite friends, relatives and neighbours over to look at the Kolu, which is essentially an exhibition of various dolls and figurines. In Kannada, this exhibition is called Bombe Habba, Bommai Kolu in Tamil, Bomma Gullu in Malayalam, and Bommala Koluvu in Telugu.

Navratri is referred to as Dasara in Karnataka. Yakshagana, a night-long dance in the form of epic dramas from Puranas are enacted during the nine nights of Navratri. The Mysore Dasara is celebrated with great pomp and shows depicting the triumph over evil. It is observed as the state festival steered by the royal family of Mysore and their jumbo savari.

The 10th day is celebrated as 'Vijaya Dashami'. It is the day of "Vidyaarambam" in Kerala, where young children are initiated into learning. In the southern city of Mysore Dussehra is celebrated with grand processions on the streets carrying Goddess Chamundi.

In the end, Navratri is really about reconnecting with something much bigger than us and these rituals are tools that help us do that. Plus, these nine days have been given to us to rest, rejuvenate and connect with ourselves which, in turn, helps us connect better with our loved ones and celebrate life.

In Western India, particularly in the state of Gujarat, Navratri is celebrated with the famous Garba and Dandiya-Raas dance. Garba is a graceful form of dance, wherein women dance gracefully in circles around a pot containing a lamp. The word 'Garba' or 'Garbha' means womb, and in this context, the lamp in the pot, symbolically represent life within a womb. Besides the Garba is the Dandiya dance, in which men and women participate in pairs with small, decorated bamboo sticks, called dandiyas in their hands. At the end of these dandiyas are tied tiny bells called ghungroos that make a jingling sound when the sticks hit one another. The dance has a complex rhythm. The dancers begin with a slow tempo, and go into frenzied movements, in such a manner that each person in a circle not only performs a solo dance with his own sticks but also strikes his partner's dandiyas in style!

Jeenakshi, a Gujarat based homoeopathic doctor and Art of Living teacher describes the festivities, "As for our traditions, in Gujarat, we play Garba for ten days, from nine in the evening to four in the morning every day. This includes men, women, and even, children. Mind you, each city, whether it's Ahmedabad or Baroda has its own style of garba."

"More than the pujas, we are fond of playing garba, which is organized by every society and club in Gujarat. One can easily find classes for it in every city and town. Plus, we all especially buy new dresses - chaniya-cholis for women, and turbans and kedias for men. Some people even fast during these days, despite which they attend Garba each evening. In short, "Navratri is the time to visit Gujarat and take part in these festivities."

The last five days of Sharad Navratri is celebrated as Durga Puja in West Bengal and North East India. Devi Durga is shown with various weapons in her hand, riding on a lion. The lion signifies the dharma, the willpower, while the weapons denote the focus and severity needed to destroy the negativity in our minds. The eighth day is traditionally Durgashtami. Exquisitely crafted and decorated life-size clay idols of the Goddess Durga depicting her slaying the demon Mahishasura are set up in temples and other places. These idols are then worshipped for five days and immersed in the river on the fifth day.

Jonaki, an engineer from Kolkata, shares "Out here, Navratri is celebrated as Durga Puja, for which we start planning months in advance. These five days of puja are meant for rest, family and going to different Durga puja pandals, each with a different theme and vibe, and of course, a gorgeous & life-sized idol of the goddess Durga. Some pandals are super fancy, done up with great lighting and sound, while the others are more simple and elegant. It's also the time when women take out their gorgeous Bengali saris, and men dress up in kurta-pyjamas. But the favourite part of the puja is attending the Maha Aarti every evening with the sound of the dhol in the background, and as a result, the trance-like state many of us experience."