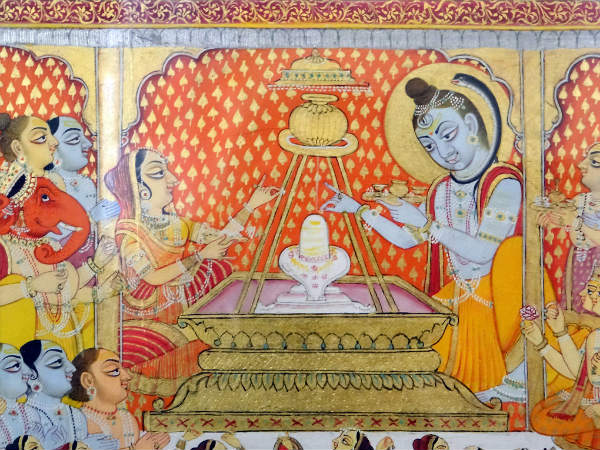 We have always seen Shiva Linga (Ling) in black or ice Ling (only in Amarnath). How about a colourful Shiva Linga? The tales of this temple are as vibrant as the Linga himself! No doubt this is one of the mysterious Shiva temples in India. A journey to the interiors of Rajasthan will take us to a place where Shivling changes its colour thrice a day!

Surprisingly, the Shiva Linga at Achaleshwar Mahadev Temple looks red in the morning, saffron in the afternoon and wheatish in the evening. Though some researchers believe it is because of the sun rays that falls on the Linga, no one has come up with a proper scientific explanation. Many even stay back at Achaleshwar Mahadev Temple from morning till evening to see this interesting sight in Dholpur, Rajasthan.

Another major attraction in this 2500-year-old temple is the statue of Nandi. It is said that this Brass Nandi is made from the mixture of five different metals. Legend has it that once this idol of Nandi released thousands of bees against the Muslim invaders who tried to attack the temple.

Here Shiva is said to be a swayambu (self-manifested) one. Once, some people got curious and began digging around the linga to know its depth. They were surprised to see its extreme depth (roots) and stopped the process. Records also suggest that this temple was built around the toe mark of Lord Shiva!

Due to its remote location, many are not able to visit Achaleshwar Mahadev. However, it is a strong belief that Lord Shiva fulfils all the wishes of devotees who come here. Especially, the unmarried who are not finding partners come here pray.

This Shiva temple is one such example to show the wonders hidden in nature!

Wait, we are not done yet! Take a diversion to Hapur in Uttar Pradesh and find a similar Shiva Linga, which changes its colour. Even here the Shiva is a self-manifested one and it changes colour three times a day. Residents of Dantula Village have a great respect for this deity. Many come here to seek blessings from Mahadev.

This place is just 60km from Delhi!

How to Reach Dholpur

Achaleshwar Mahadev temple is situated in Chambal of Dholpur.

Dholpur is a city which is well connected to other parts of the Rajasthan. Dholpur is about 280km from Jaipur. It is just 55km from Agra to Dholpur.

Comments
Read more about: religious travel shiva temples temples rajasthan
Other articles published on Jul 13, 2016
We use cookies to ensure that we give you the best experience on our website. This includes cookies from third party social media websites and ad networks. Such third party cookies may track your use on Nativeplanet sites for better rendering. Our partners use cookies to ensure we show you advertising that is relevant to you. If you continue without changing your settings, we'll assume that you are happy to receive all cookies on Nativeplanet website. However, you can change your cookie settings at any time. Learn more
Change Settings Continue