Explore These Historic Temples In Guwahati And Learn About Their Importance 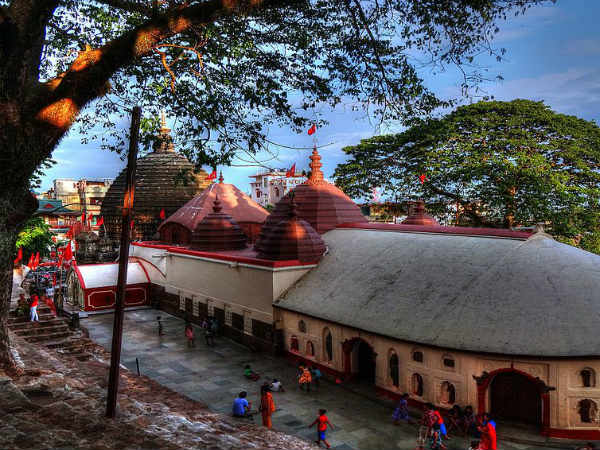 Located on the banks of the Brahmaputra river and surrounded by beautiful undulating hills, Guwahati is the largest city in Northeast India and is a popular tourist attraction in the region. It is home to historical monuments, natural spots and religious sites. Therefore, it allures each and every kind of traveller. As of now, Guwahati is frequented by tourists in millions every year. After all, who wouldn't love to take a break from the polluted city life and enjoy a breath of fresh air in the midst of hills and streams. It is also one of the few cities in the country, which, despite being megacities, harbour a peaceful and stainless environment.

As Guwahati has an age-old history, it is mostly visited for its ancient sites and religious centres. Following is the list of 6 historic temples in Guwahati which must be visited and explored by every traveller.

Dedicated to Goddess Kamakhya, the Hindu tantric goddess of desire, Kamakhya Temple is located atop Nilachal Hill in Guwahati and is said to be the oldest-known temple in the region. As per historical records, the temple was established in the 8th century and has gone through several renovations since its formation. Today, the temple is the most important site in the city and is visited by thousands of Hindu devotees as well as tourists from all over the state.

Hence, it would be perfectly fine to say that your trip to Guwahati would certainly be incomplete if you forget to visit this ancient temple and take the blessings of Goddess Kamakhya. The temple also boasts of its commendable architecture and the presence of beautiful carvings proves it.

Constructed in the year 1764 by Rajeswar Singha, a king of the Ahom dynasty, Basistha Temple is a small temple dedicated to Lord Shiva and is located within the boundaries of the Basistha Ashram, which was founded Vasishtha, one of the seven greatest sages of all time. The temple is located on the outskirts of Guwahati, and hence one can easily feel the essence of tranquillity within its boundaries.

It is surrounded by beautiful vegetation and relaxing streams. The ashram complex also houses a cave, which was used by sage Vasishtha for meditation, and a soothing waterfall. So, don't you think a visit to Basistha Temple would be a rejuvenating experience?

Another temple which was built by the Ahom dynasty several centuries ago in the Medieval Period of India, Umananda Temple is dedicated to Lord Shiva and is located in the midst of the Brahmaputra river at Peacock Island. Did you know that Peacock Island is the smallest river island in the world?

So, don't you think this fact makes it a must-visit destination for every offbeat traveller? As the temple site is said to be the place where Lord Shiva meditated and imparted knowledge to Goddess Parvati, it is a site of great religious importance. Hence, it witnesses Hindu devotees in thousands every year. The region in and around the temple is also good for capturing the best of the sunrise and sunset.

If there is any place in Guwahati after Kamakhya Temple which deserves to be visited by every history lover and offbeat traveller, then it is certainly the age-old Dirgheshwari Temple. The temple is located on the banks of the river Brahmaputra and is considered as one of the Shakti Peethas in India.

As per local legends, the temple is said to be the site where a body part of Goddess Sati fell after her dead body was cut into numerous parts by Lord Vishnu. The major attraction of the temple is the festival of Durga Puja which is celebrated with great zeal and zest. Did you know you can also witness the footprints of Goddess Durga here?

One of the few popular temples in Assam dedicated to Lord Krishna, Doul Govinda Temple is located in the foothills of Chandra Bharati Hill and one needs to cross the Brahmaputra river to reach it. Here, apart from enjoying the divine atmosphere of the temple, you can also take a stroll on the sandy beaches of the river. The major festivals celebrated here include Holi.

Located atop Sukreswar Hill, this beautiful temple is an important religious centre amongst Hindus, especially amongst Shaivites as the temple is dedicated to Lord Shiva. The temple is known for its peaceful environment, and hence if you would love to meditate for a while, then it is a perfect place for you. You can also enjoy the spectacular views of the sun at the time of dawn and dusk here.